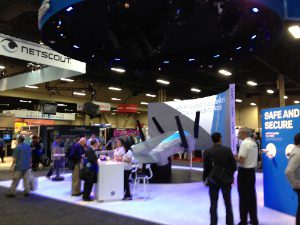 Cloud computing was a key focus as the Interop trade show convened in Las Vegas last week. The cloud acronyms – IaaS, PaaS, SaaS – flew as fast as the nonstop dice on the nearby gaming tables.

Expanding Interop’s cloud coverage this year was the Cloud Connect Summit, a two-day offering of panel discussions on how businesses can leverage cloud services. The event attracted a hefty complement of the clouderati.

In the week before Interop a flurry of headlines indicated that cloud plays a role in all things tech these days. Cisco unveiled its $1 billion InterCloud initiative, its so-called network of clouds. Microsoft announced an iPad version of its cash cow Office, which promotes its cloud-based version of Office. Intel invested $740 million in the Hadoop start-up Cloudera, largely a Big Data move but one that also leverages cloud. Google and Amazon both announced steep price cuts in cloud services, with AWS touting its “42nd price reduction since 2008.” (Really, has someone at AWS been counting each one?)

The cloud focus is no surprise given a report from IDC that details its centrality, titled Battles for Dominance — and Survival — on the 3rd Platform. (For full insight on the report, see Bernard Golden’s analysis).

In short, IDC indicates that IT is undergoing a generational shift as it transitions to a 3rd platform, after mainframe and client/server. This 3rd platform is comprised of four booming technologies: Cloud, Big Data, mobile and social. To quote from the report:

* “3rd Platform technologies and solutions will drive 29% of 2014 IT spending and 89% of all IT spending growth. 40–50% of that growth will come from cannibalization of traditional (2nd Platform) markets.”

For vendors, the importance of having a competitive cloud offering has shifted from “sure, it’s very important” to “spend whatever it takes. Now.” Which brings us back to the recent Interop in Las Vegas. As a gathering of thousands of IT professionals and more than 300 vendors, the event reflects the industry’s collective ambitions and anxieties. As I spoke with attendees, vendors and experts, I noted that the concept of cloud computing was attached to nearly everything.

Below is a selection of videos of Cloud Connect panelists and vendors with booths in the trade floor. Taken as a group, the videos represent the prevailing trends in cloud computing, circa April 2014.

As you’ll see if you view the videos, there is little or no consensus about best practices in cloud computing. The technology is exceptionally fluid – still being developed, in fact – and the potential approaches are just as fluid. Virtualization in the data center is often called private cloud; or a remotely hosted cloud instance can also be private cloud – or public cloud. The industry hungers for an open source cloud platform, hence OpenStack’s many sponsors. Yet opinions on OpenStack vary wildly, with adherents pointing to big successes and critics dismissing it as immature. Hybrid cloud is seen by some as the ultimate answer, while other see its complexity as a font of headaches.

The one concept that everyone agrees on is the need for interoperability. The idea that a large vendor can be the 800-pound gorilla of the datacenter is a thing of the past. Cloud technology is changing quickly, no one knows where it’s headed, and no vendor can afford to be left behind. So it’s a safer bet to support open standards and remain part of the ecosystem, rather than hope that a proprietary stance can bring big profits.

That single point of agreement is helpful for customers, who all run businesses/datacenters with a hodge-podge of technologies. As for the many disagreements about the cloud, that will likely result in costly experimentation for businesses. Vendors are eager to sell solutions, but customers need to do as much research as possible before jumping on board.

“We really need to go beyond this cloud washing and the overuse of the ‘as-a-service’ and look at ‘what does that solution provide that gives us the right economics?’”