BOSTON – Jim Whitehurst, the CEO of Red Hat, took the stage at his company’s Red Hat Summit with a key message: open innovations takes many forms and it takes work.

“In a world where information is the source of value creation, that means that innovation is determining value,” Whitehurst said.

Whitehurst stressed that in the modern world it is innovation that determines the winners and the losers. So how does innovation work and what does it look like in 2015? For Whitehurst, DevOps is at the core, but not just as a developer mindset, but as a business mindset.

“I think DevOps and the principles, mindset and culture are extensible beyond technology to all aspects of running an organization,” Whitehurst said.

The way that DevOps can work in an enterprise organization is to first understand that innovation is de-centralized, with the best ideas coming from the best sources, wherever they might be.

It’s also important to have an open and collaborative culture in order to facilitate innovation and organizations need to be modular to be able to react to change.

Perhaps most importantly about innovation, Whitehurst emphasized that it needs to be user-driven to meet the needs of the user and not just of the organization.

“Change is hard, it involves a change in mindset, a change in culture a change in process, and it must include technology that is built for change,” Whitehurst said.

While Whitehurst is eager for as many companies as possible to embrace open-source, he cautioned that open-source isn’t just a license.

“We believe that the power of open source is in the power of participation, users and the best ideas winning,” Whitehurst said.

“Open source has the power to accelerate innovation and change the way software is built and consumed,” Whitehurst said. “But it’s not just about the license, it’s about participation too.” 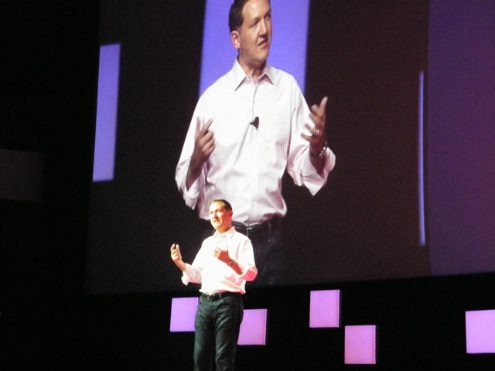