4G smartphone shipments will exceed 1 billion units in 2016, thanks in part to the rise affordable 4G connectivity options in emerging markets.

Melissa Chau, associate research director at IDC’s Worldwide Quarterly Mobile Device Trackers unit, noted that 4G struggled to gain traction “in many emerging markets as 4G data tariffs have long been very expensive compared to 3G, while 4G handsets themselves have also been relatively pricey across the board,” in a statement. “We are quickly seeing this change in key growth markets like India where new operator Reliance Jio is aggressively trying to shake up the market by handing out free 4G SIM cards and launching own-branded low-cost 4G-enabled smartphones.” 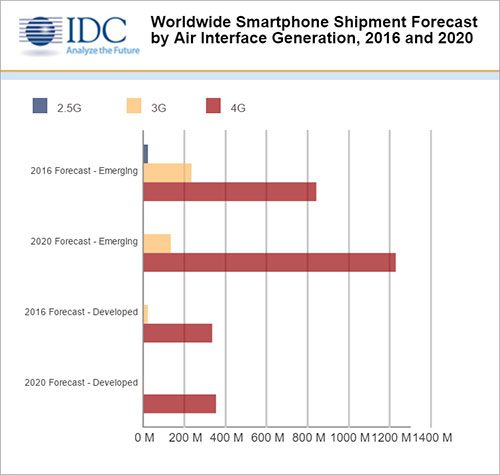 Last year, 4G-enabled smartphones accounted for 61 percent of all smartphone shipments in emerging markets. This year, that figure is expected to jump to 22 percent. Asia-Pacific (excluding Japan), Latin America, Central and Eastern Europe, and the Middle East and Africa, all fall into the emerging markets category.

In contrast, 85 percent of all smartphones shipped to mature markets (U.S., Canada, Japan and Western Europe) were 4G-enabled. This year, IDC expects that 94 percent will support 4G speeds.

“In North America and Western Europe, Google has been putting a significant amount of marketing dollars behind the new Pixel and Pixel XL, although early supply chain indications are that volumes are not at the point where Samsung or Apple should see a significant impact for Q4,” said Reith in prepared remarks. “Of course, as we head into 2017 this can change, but many eyes will be on Google to see how serious they are about pursuing the hardware play.”

Apple, meanwhile, is expected to close out 2016 as the first full year of declining iPhone shipments, despite a warm reception for the iPhone 7 and 7 Plus. IDC expects Apple to “have something big up its sleeve” next year to mark the iconic handset’s tenth anniversary. Until then, the company is facing competition from low-cost vendors and Google on the high end.