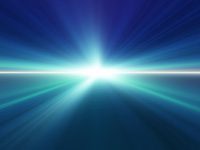 Since before the dawn of the computer age, scientists have been captivated by the idea of creating machines that could behave like humans. But only in the last decade has technology enabled some forms of artificial intelligence (AI) to become a reality.

Interest in putting AI to work has skyrocketed, with burgeoning array of AI use cases. Many surveys have found upwards of 90 percent of enterprises are either already using AI in their operations today or plan to in the near future.

While many solutions carry the “AI,” “machine learning,” and/or “deep learning” labels, confusion about what these terms really mean persists in the market place. The diagram below provides a visual representation of the relationships among these different technologies: 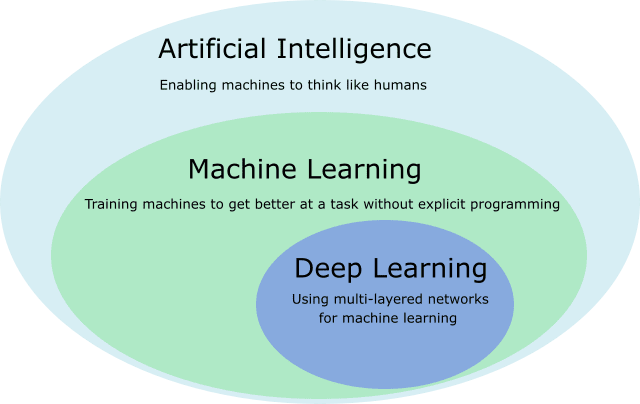 Computers excel at mathematics and logical reasoning, but they struggle to master other tasks that humans can perform quite naturally.

For example, human babies learn to recognize and name objects when they are only a few months old, but until recently, machines have found it very difficult to identify items in pictures. While any toddler can easily tell a cat from a dog from a goat, computers find that task much more difficult. In fact, captcha services sometimes use exactly that type of question to make sure that a particular user is a human and not a bot.

In the 1950s, scientists began discussing ways to give machines the ability to “think” like humans. The phrase “artificial intelligence” entered the lexicon in 1956, when John McCarthy organized a conference on the topic. Those who attended called for more study of “the conjecture that every aspect of learning or any other feature of intelligence can in principle be so precisely described that a machine can be made to simulate it.”

Some of these early researchers believed it would be only a few years before they solved these problems. In reality, however, it took several decades for computer hardware and software to advance to the point where AI applications like image recognition, natural language processing and machine learning became possible.

Critics rightly point out that there is a big difference between an AI system that can tell the difference between cats and dogs and a computer that is truly intelligent in the same way as a human being. Most researchers believe that we are years or even decades away from creating an artificial general intelligence (also called strong AI) that seems to be conscious in the same way that humans beings are — if it will ever be possible to create such a system at all.

If artificial general intelligence does one day become a reality, it seems certain that machine learning will play a major role in the system’s capabilities.

Machine learning is the particular branch of AI concerned with teaching computers to “improve themselves,” as the attendees at that first artificial intelligence conference put it. Another 1950s computer scientist named Arthur Samuel defined machine learning as “the ability to learn without being explicitly programmed.”

In traditional computer programming, a developer tells a computer exactly what to do. Given a set of inputs, the system will return a set of outputs — just as its human programmers told it to.

Machine learning is different because no one tells the machine exactly what to do. Instead, they feed the machine data and allow it to learn on its own.

Reinforcement learning is one of the oldest types of machine learning, and it is very useful in teaching a computer how to play a game.

For example, Arthur Samuel created one of the first programs that used reinforcement learning. It played checkers against human opponents and learned from its successes and mistakes. Over time, the software became much better at playing checkers.

Reinforcement learning is also useful for applications like autonomous vehicles, where the system can receive feedback about whether it has performed well or poorly and use that data to improve over time.

Supervised learning is particularly useful in classification applications such as teaching a system to tell the difference between pictures of dogs and pictures of cats.

In this case, you would feed the application a whole lot of images that had been previously tagged as either dogs or cats. From that training data, the computer would draw its own conclusions about what distinguishes the two types of animals, and it would be able to apply what it learned to new pictures.

As the system absorbed more data over time, it would become better and better at the task. This technique is said to be “supervised” because it requires humans to tag the images in advance and oversee the learning process.

By contrast, unsupervised learning does not rely on human beings to label training data for the system. Instead, the computer uses clustering algorithms or other mathematical techniques to find similarities among groups of data.

Unsupervised machine learning is particularly useful for the type of big data analytics that interests many enterprise leaders. For example, you could use unsupervised learning to spot similarities among groups of customers and better target your marketing or tailor your pricing.

Some recommendation engines rely on unsupervised learning to tell people who like one movie or book what other movies or books they might enjoy. Unsupervised learning can also help identify characteristics that might indicate a person’s credit worthiness or likelihood of filing an insurance claim.

The phrase “deep learning” first came into use in the 1980s, making it a much newer idea than either machine learning or artificial intelligence.

Neural networks and deep learning have become much more popular over the last decade in part because hardware advances, particularly improvements in graphics processing units (GPUs), have made them much more feasible. Traditionally, system designers used GPUs to perform the advanced calculations necessary for displaying high-quality video and 3D gaming.

However, those GPUs also excel at the type of calculations necessary for deep learning. As GPU performance has improved and costs have decreased, people have been able to create high-performance systems that can complete deep learning tasks in much less time and for much less cost than would have been the case in the past.

Learn more about AI vs. Machine Learning vs. Deep Learning

If you are interested in learning more about AI vs machine learning vs deep learning, Datamation has several resources that can help, including the following:

SEE ALL
ARTIFICIAL INTELLIGENCE ARTICLES
Previous articleTop 10 API Management Tools
Next articleWhat is Artificial Intelligence & How Does It Work?