AUSTIN — In a keynote at the DockerCon conference today, Docker founder Solomon Hykes re-iterated the project’s mission and explained the very basic model of how the project works. Hykes has said time and again that Docker’s mission is to create tools of mass innovation, which is a message he said again today.

He explained that the best tools do three things. First, they get out of the way. Second, they adapt to how developers want to work, and last they make the powerful, simple.

When it comes to development success, Hykes said that accelerating the development cycle is a primary attribute.

Once Docker has built a tool, the development process follows a simple iterative model. Hykes said that Docker releases something, developers complain about it, or note something is missing. The second step in the process is that Docker fixes whatever it is the developers were complaining about. The third step is to go back and repeat the first two steps – again and again. 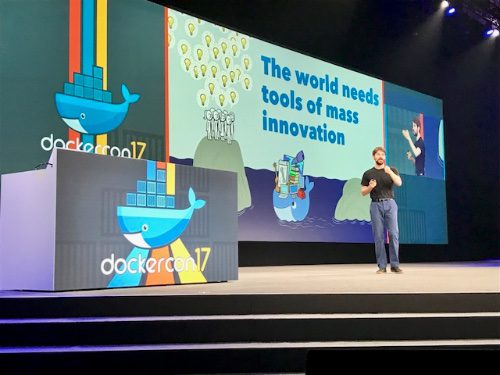 “That’s all we do at Docker,” Hykes said. “We make lists of details and keep fixing things.”

Hykes said that developers do notice the details which is why Docker pays attention, listens and does the best it can to fix issues.

To that end, new releases of Docker fix issues that users have had in the past. One challenge cited by Hykes is that developers have said that Docker image are too large. To solve that problem, an upcoming Docker release will have a multi-stage build process, that enable the composition of smaller images.

Developers have also been using docker on the desktop and want to easily be able to move what they build to the cloud in a seamless manner. To that end, Docker is has a new desktop to cloud capability, to solve that challenge.

Docker is not also changing the way it builds tools, moving from a monolithic model and a single project, to hundreds or projects and a common assembly model for components. It’s all part of figuring out how to scale Docker as a project and as a community as well.

Hykes understand that Docker isn’t just for hobbyist anymore and it is increasingly becoming a mainstream technology.