Cloud IT Infrastructure Spending to Reach $38.2 Billion in 2016

Enterprises are driving up demand for IT hardware that winds up being deployed in cloud data centers, according to the latest forecast from International Data Corporation’s (IDC) Worldwide Quarterly Cloud IT Infrastructure Tracker.

This year, IDC predicts that worldwide spending on IT infrastructure – a category that includes servers, storage systems and Ethernet switches – for cloud computing environments will total $38.2 billion, an 18.9 percent increase compared to 2015. Hardware spending on public clouds will reach $24.4 billion, a 14.1 percent gain, while the private cloud IT infrastructure market is expected to hit $13.9 billion, an 11.1 percent improvement.

Meanwhile, while non-cloud environments will reduce their IT infrastructure purchases by 4 percent this year, they are still responsible the majority of all spending at 62.8 percent.

Seeking to channel their resources into growing their businesses instead of managing IT systems, businesses are increasingly turning to the cloud, noted IDC research director, Natalya Yezhkova.

“For the majority of corporate and public organizations, IT is not a core business but rather an enabler for their core businesses and operations,” she said in a statement. “Expansion of cloud offerings creates new opportunities for these businesses to focus efforts on core competences while leveraging the flexibility of service-based IT.”

The Ethernet switch segment of the market is the fastest growing at 26.8 percent in 2016, suggesting that data center operators are focused on bulking up their networks to deliver fast and robust cloud services. Spending on cloud servers and storage systems will rise 12.4 percent and 11.3 percent, respectively.

HP Enterprise (HPE) and Dell are the likeliest to benefit from the increased appetite for cloud servers. 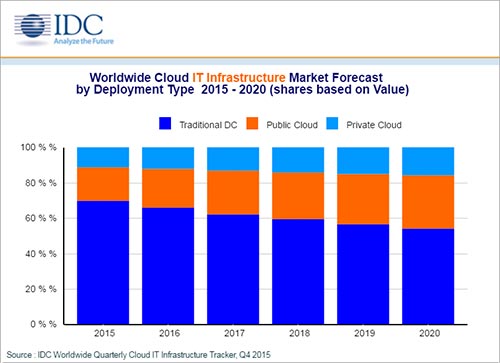 Last month, IDC revealed that HPE and Dell were the top two server vendors for all of 2015. The have a good shot at staying at the top, provided they continue to cater to cloud providers. “In the short term, 2016 looks to be a year of accelerated cloud infrastructure expansion with existing footprints filling out and new cloud datacenter buildouts across the globe,” said IDC research director Kuba Stolarski, in a statement.

Over five years, IDC predicts that spending cloud IT infrastructure will grow at a compound annual growth rate (CAGR) of 12.5 percent, culminating in $57.8 billion in 2020, or nearly half (47.9 percent) of all enterprise IT infrastructure spending. Public cloud providers will be responsible for $37.5 billion of that figure while private clouds will be responsible for the remainder, or $20.3 billion.