It can’t be easy coming up with a major new operating system every two years, one with giant compelling reasons why users need to upgrade, especially when the starting product is already pretty strong.

The big idea in the latest Apple operating system — OS X 10.7 — better known as OS X Lion, is that it makes a Mac desktop or notebook more like an iPad. While that must have sounded brilliant in the planning stages, it has resulted in the least necessary OS X upgrade ever. No doubt experienced users will turn off or simply never use many of biggest features of the new OS.

Which isn’t to say it isn’t worth upgrading. The price is only $29, and it’s good for all your household’s computers. Apple isn’t messing around with that family license anymore. Plus, Lion has over 250 new features, and many of the smaller ones are genuinely useful.

Since they couldn’t add a touch screen, they did the next best thing and added a variety of new touch gestures. If you’re using a notebook, Magic Mouse, or Magic Trackpad, you’ll likely appreciate the expanded number of gestures, even if some of them are a little hard to remember. (Show Desktop requires you to place your thumb and three fingers on the pad, then fan them outward.) Launchpad: The new Launchpad give users an iPad-like view of all their applications.

Anyone who prefers using a mouse, however, won’t be won over. While the gestures are useful to those stuck with a trackpad, using a mouse is simply more efficient.

Lion’s new Mission Control screen shows all your Dashboard widgets (remember those), Spaces (again, remember those?), and open windows on one screen so you can quickly navigate to a different area. It’s supposed to mimic an iPad’s homescreen.

The result though, is cluttered and unneeded. Similarly, the new Launchpad gives you a compact icon view of all the apps on your system, so you can choose one to open. It looks a lot like the app display on an iPad. In both of these cases, Mission Control and Launchpad, Apple has added highly graphic new ways of doing what the Dock already does, but not as well. 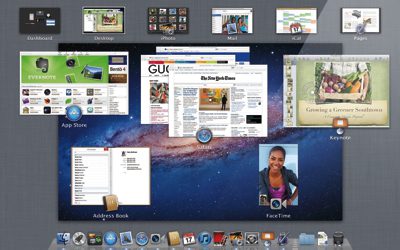 MissionControl: A hub for anything you’ve got going on your Mac, MissionControl lets you jump to another area quickly. (Graphic courtesy Apple.)

Consider that in the Dock, you can click your applications folder and get a text list of all your applications, allowing you to choose one quickly. The Launchpad, by contrast, can take up several screens (five on this reviewer’s system) and requires a lot of scrolling to find what you’re looking for. It’s hard to improve on success, and the Dock already did it better.

To really make applications feel like apps, Apple introduced a system-wide full screen view (well, system-wide for Apple programs; other developers can choose to take advantage of it if they wish).

Previously seen in the latest version of iPhoto, this lets the user tap a double-arrow symbol in an application’s top right corner to enter full screen view. Multi-touch gestures can then be used to scroll between applications.

On a notebook, where the screen is smaller, this can be useful. It lets you use every inch of screen real estate. But for those with larger monitors, it’s simply unnecessary and will likely go unused.

What’s the advantage, after all, of removing the Dock, desktop, and toolbar, elements you use to change programs and operate your computer?

Installing OS X Lion means taking a journey with Apple, letting its design experts take control of your system and drag you into a shiny new future. It’s the game of Apple Knows Best that the company has been playing for years now, insisting that users adapt to an Apple way of doing things.

Thankfully, in Lion, you can turn those decisions off. Take Mail, for example, which has been given a bold metallic new look. By default, Mail hides folder and mailboxes, offering instead a button navigation along the top. Most users, however, will quickly click the Show button in the top left corner to make their folders and mailboxes visible again. Functionality trumps elegance.

Or take the new rules for scrolling, intended to mimic what happens on a tablet. The system we’ve all gotten used to with mice scroll wheels is to scroll down to move down a page. In Lion, the default is the reverse of this. Certainly most scroll mouse users will uncheck that option as soon as they realize they can.

Some users will be in for an unpleasant surprise after installing OS X Lion, as Apple no longer supports apps that require the older PowerPC chip.

This means that Quicken, Microsoft Office for Mac 2004, Pro Tools, eFax Messenger, and several other (mostly minor) programs won’t open. This reviewer kept an old copy of Palm Desktop on hand, with a few things stored in Notes. Those things will never be seen again. If you’re worried about compatibility of a third-party app, check with that app’s developer before upgrading to Lion. Mail: Mail has been redesigned to offer a more streamlined look. Gone (at least by default) are the list of folders and mailboxes on the left-hand side. (Graphic courtesy Apple)

We only uncovered one odd problem while testing. The search field in Mail simply isn’t turning up results properly. It repeatedly misses older messages that match search terms. The regular desktop search, luckily, is able to find anything, including old Mail messages.

OS X Lion is worth your $29, but it’s worth it for the many smaller features that make the operating system more usable.

Run a search from the magnifying glass icon in the upper right window and you can now hover over the results to get a preview. You can even scroll through that preview to see the whole document. It’s terrifically handy.

Also, you can now resize an application window by dragging on any side. You don’t need to have the correct corner. These are small touches that make work more pleasant.

Other welcome additions include AirDrop, which lets you wirelessly drop files to Macs on the same network (only computers released in the last few years are compatible) and the ability to combine videos in QuickTime into one longer video just by dragging and dropping.

In the end, we don’t want a radically redesigned way of using the Apple OS, just a series of refinements that make life easier (and we’d like desktops and iPads to remain two separate worlds). That might not be enough to justify a $129 upgrade, but for a sweet $29, small refinements are just fine.

SEE ALL
APPLICATIONS ARTICLES
Previous articleCloud Computing Could Lead to Billions in Energy Savings
Next articleMicrosoft Office on Android: The Best 2011 Response to the iPad