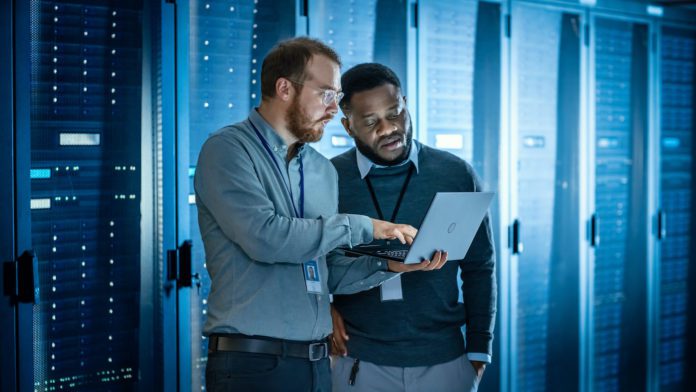 The term SD-WAN is short for software-defined wide area network. It’s a type of virtual WAN architecture that uses software to manage the network communication.

SD-WAN is a smart upgrade to traditional WAN networks, enabling organizations to connect users with applications efficiently and privately over the internet.

See below to learn all about SD-WAN technologies and the global SD-WAN sector:

The SD-WAN services segment of the market, after accounting for the economic effects of COVID-19, has an estimated CAGR of 52.8% over the seven-year analysis period. The SD-WAN solutions segment, on the other hand, is forecast to reach $18.9 billion at a CAGR of 46.6% by 2027.

Regionally, the global SD-WAN market is segmented as follows:

By industry vertical, the SD-WAN market is expected to be dominated by the IT and telecommunications segment by the end of the forecasting period in 2030.

Other notable industry verticals include:

SD-WANs offer encrypted communications tunnels between two locations. By installing the SD-WAN system on all ends, it becomes responsible for routing incoming and outgoing traffic based on preset configurations and traffic policies customized by the network’s admins.

The architecture of an SD-WAN is divided into two planes; the control plane is responsible for monitoring and transmitting the data across the network, while the data plane — also known as the forwarding plane, is the actual lines of communication carrying the data packets from point A to point B.

Switching to SD-WAN allows corporations and organizations to connect their local networks through the internet effectively and securely. Furthermore, the lagging and latency of the connection are greatly minimized, alongside the cost. A survey by Silver Peak found that 61% of enterprises are looking to switch to SD-WAN solutions within the next 24 months of reporting.

The edge of the SD-WAN architecture consists of the endpoints connected to the network. The edge can be anything from a cloud-based server to data centers and even off-premises LAN.

The SD-WAN controller is the component the network admins and operators use to gain full access to the network. The control panel is a centralized point of access, enabling them to implement transfer policies and changes to the network.

The orchestrator is the SD-WAN’s virtual manager. It’s the part of the network overseeing incoming and outgoing traffic from the edge and enforcing the policies and configurations set by the network admins.

SD-WAN’s three primary components can be used to establish large-scale and reliable connections that offer a wide variety of networking features and opportunities, depending on the deployment, such as:

The combination of multiple SD-WAN features and compatible technologies can resolve business networking issues and provide numerous benefits, such as:

“Network speed and improvement in reliability aren’t the only reasons software-defined wide area network (SD-WAN) technology is a rising choice for retail and office locations; having complete control of network traffic management is also a great advantage,” says Anshuman Awasthi, member of the Forbes Technology Council.

“The power of SD-WAN, which manages the network based on applications, provides a lot of flexibility to an enterprise to manage the network traffic the way it wants to.”

SD-WAN solutions and services can be used by organizations that regularly communicate and transfer data on a wide, geographical scale, across numerous local networks, regardless of industry.

Following are a few case studies highlighting the use of SD-WAN technology in multiple industries:

Based in Round Rock, Texas, the Dell Technologies is grew from a 2016 merger between Dell and EMC. The company provides technology services and solutions, ranging from data storage and information security to cloud computing and data analytics.

Both companies had traditional WAN architectures. The incompatibility of having multiple legacy networks increased Dell EMC’s dependency on cloud applications, and any policy updates require a lot of time and effort.

Looking to unify the separate network for the entire workforce, Dell EMC settled on using VMware SD-WAN for its total of 500 locations and thousands of employees worldwide.

“With VMware SD-WAN, it is much simpler and easier to create or edit business policies and push them out across the entire network,” says Jason Chan, senior director of global network services, Dell.

Switching to VMware SD-WAN architecture, Dell EMC was able to save on resources, increase network bandwidth, automate its policy updates, and install cybersecurity capabilities through a native firewall.

KAWO needs to maintain real-time communication and access with clients in various time zones. The application needs to perform up to standard in every part of the world and at all times.

As a small team handling a massive networking environment both inside and outside of China, KAWO needed to upgrade its network infrastructure. Working with Aryaka for networking, KAWO was able to boost and stabilize its network performance.

“We have not been disappointed by the level of service we get from Aryaka,” says Alex Duncan, co-founder and product lead, KAWO.

“Whenever we contact support, and sometimes the issue is on our end, they are always incredibly patient in helping us get to the bottom of any problem and that is something we really appreciate. The general communication and ease of working with Aryaka has been a big bonus.”

AutoNation is an American automotive retailer that provides both new and pre-owned vehicles all over the U.S. Based in Fort Lauderdale, Florida, the company has over 300 retail outlets and 25,000 employees.

For the longest time, AutoNation was reliant on Multiprotocol Label Switching (MPLS) to handle telecommunication needs across its hundreds of branches. The company still found itself struggling with acquiring the needed bandwidth to run operations and boost sales and productivity.

Looking for faster, more reliable, and cost-effective solutions than MPLS, AutoNation turned to Palo Alto Networks’ SD-WAN solution. It needed something for its 350 locations and two colocation data centers that’s reliable and secure and be able to deploy rapidly without downtime.

“The value MPLS brings for the cost we were paying — it simply wasn’t there. At the end of the day, MPLS is a low-bandwidth and high-cost connection,” says Adam Rasner, VP, technology operations, AutoNation.

“Prisma was totally engineered towards SD-WAN, while products from other vendors were not purpose-built for what we needed.”

Some of the leading providers of SD-WAN services and solutions in the global market include: