In total, they shipped 343.3 million smartphones during the second quarter (Q2) of 2016, a negligible 0.3 percent year-over-year gain. On the bright side, shipments rose 3.1 percent compared to the previous quarter (333.1 million units).

Ryan Reith, program vice president at IDC Worldwide Quarterly Mobile Device Trackers, noted that are adjusting their product plans and business strategies to cope with a market that is no longer experiencing runaway growth. 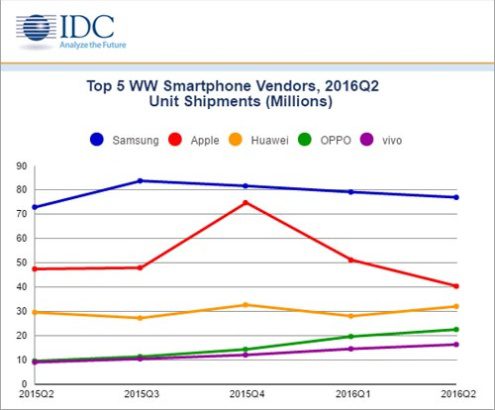 “Mature markets continue the transition away from pure subsidy and over to EIP [equipment installment plan] programs and Apple is beginning to put more emphasis on ‘Device as a Service’ to try to prevent lengthening replacement cycles,” said Reith in a statement. “This is a growing theme we have heard more about from PCs to smartphones.”

Samsung, buoyed by demand for its Galaxy S7 and S7 Edge flagship phones, maintained its perch at the top of the market in Q2 with shipments of 77 million smartphones and a 22.4-percent share of the market, a 5.5 percent year-over-year increase. “The new models proved to be the right mix of style and features and helped Samsung grow profits in the quarter. The inclusion of removable storage, waterproofing, and faster processor proved to be the winning combination for Samsung as consumers flocked to the new model,” stated IDC.

Second-place Apple slipped 15 percent, shipping 40.4 million iPhones compared to 47.5 million last year. While it raised some eyebrows when it was announced back in March, releasing the iPhone SE — essentially an iPhone 5/5S with the guts of an iPhone 6S — turned out to be a smart move by the Cupertino, Calif.-based device maker.

The handset was a hit in both emerging and mature markets, said IDC. First-time buyers and users switching from Android flocked to the relatively affordable hardware. On the downside, the iPhone SE drove down the iPhone’s average selling price to $595 in Q2 from $662 a year ago.

Rounding out the top five are Huawei, OPPO and vivo. OPPO saw its shipments surge 136.6 percent to 22.6 million units, on the strength of its flagship R9 handset, an increase in its marketing efforts and inroads made in emerging markets including India and Indonesia.