Smartphone Displays Are the Next Competitive Battlefield

This year, major new product releases from Samsung and Apple are expected to help reverse some of the headwinds the smartphone market has been experiencing of late.

According to IDC, the market grew at a tepid 2.5 percent, the slowest growth rate for the device category ever. This year, the technology research firm expects shipments to reach 1.52 billion units, a three-percent increase.

That upward momentum is expected to carry into 2018, when the market will notch an additional 4.5-percent gain, with shipments concentrated around units with 5-inch to 6-inch screen sizes.

A number of factors will help lift the fortunes of smartphone makers over the next year and a half, including the improved economies of some emerging markets. Vendors are also doing their part to spur demand by launching devices with dazzling displays. 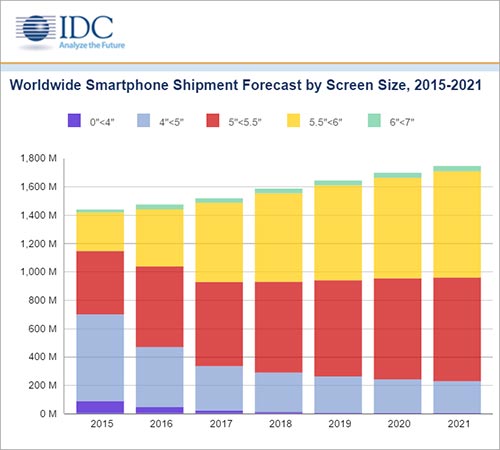 “With the ongoing fight at the high end, vendors will need to find a way to innovate ahead of the curve to attract new users and increase shipments while driving profits. The display looks like it could be the next battlefield for the smartphone over the next couple years,” said IDC research manager Anthony Scarsella in a statement. “We have seen both Samsung and LG opt for new borderless 18:9 displays and Apple could be set to join the party later this year.”

In late March, Samsung formally unveiled its latest flagship phone, the Galaxy S8. Furthering the company’s mission to banish bezels, the Galaxy S8’s OLED display dominates practically the entire front of the device and slopes over its sides. Although it sports a less daring design than its Korean competitor, LG’s new G6 smartphone features a similar 5.7-inch display with slim bezels.

Scarsella predicts that wilder smartphone screens are on the way.

“As smartphone owners continue to consume media on their devices, the screen (bigger, brighter, and bolder) will be an integral part of the overall design language for each vendor,” he continued. “From flexible to foldable and everything between, 18:9 displays look to be just the beginning of what’s to come.”

Apple, meanwhile, is readying its tenth-anniversary iPhone. Early leaks indicate that the Cupertino, Calif. device maker will switch the iPhone’s display technology to OLED (from LCD currently) and that the screen will practically stretch from corner to corner. The mechanical home button, an iPhone fixture since it debuted in 2007, is said to make way to an on-screen home button.