Mobile App Development: Pressure on IT Will Increase

Forget about the frenzy surrounding mobile applications development abating or stabilizing anytime soon. Instead, it is going to increase over the next few years.

And all of those enterprise software vendor efforts to sell prepackaged mobile versions of their apps won’t make a big dent in your workload – internal development will continue to rule. Those and other surprises came out of a global survey and qualitative research report I was involved with over the past several months.

We received responses from 414 IT managers, all at companies with at least $500 million in annual revenues. They represented a wide variety of industries, led by manufacturing, financial services and business services. Roughly one third of the respondents were from each of the following regions:

• Europe, the Middle East and Africa

While there are some variations in views based on company size, sector or region, there is a lot of uniformity in the respondents’ outlook. First, let’s look at the baseline situation.

As for how they build those apps, respondents report a mix of development tools and widespread adoption of a hybrid cloud and on-premise environment for development and deployment. While most mobile App Dev is being done using native programming languages, nearly one-third of respondents are developing cross-platform apps for the mobile Web. I suspect the preference for native languages is related to user experience and performance.

A substantial number of those mobile apps are connected to important back-end systems (see table, below). This indicates that many IT shops have proven they have not been deterred by the challenge of linking a mobile device to enterprise resource planning, customer relationship management, supply chain or other big systems using native programming languages. 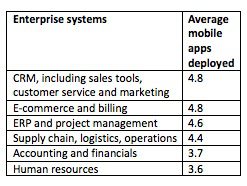 Now let’s look at their forecast for mobile App Dev within two years. A third of the respondents predicted that their update and release cycles will accelerate dramatically, while half said they will accelerate moderately. The acceleration will be led by Asia/Pacific organizations: More than four out of 10 of those respondents predict dramatic acceleration of updates and new releases in the next few years.

It appears that IT departments are under siege by end users and executives in marketing, sales, operations and other departments with an extensive mobile workforce or supplier base demanding rapid development of easy-to-use mobile apps that access enterprise data.

All of this acceleration will, of course, trigger bigger IT budgets and more IT pro hiring. The respondents estimated IT spending per employee mobile device will jump by 54% over the next two years, to $247. Key regional variation: Asia/Pacific companies will be spending at a much higher rate, outpacing European and U.S. firms.

Interestingly, respondents’ expectations for where those apps will be developed doesn’t change much, as the following table shows:

*Percentages may not sum to 100% due to rounding

Given the enormous growth of mobile app development, there is a simultaneous increase in the concern about the security of the devices accessing and storing this data, even if the device belongs to the employee. More and more IT shops will be asked to assume more and more responsibility over employee owned mobile devices, according to survey respondents. Note in the following table the growth in the percentage of companies imposing encryption and central control over their employees’ devices:

The percentage of firms increasing the IT department’s responsibility over the security of their data on personal and well as employer-owned mobile devices is not a surprise. Indeed, all of the publicity about compromised user names and passwords at retailers and other large companies has created a paranoia about mobile device security. In fact, some IT shops are dealing with mobile device data security chaos: They have a myriad of security tools and inconsistent implementations between their employer-owned and employee-owned devices.

Additional insights about the how and where of mobile applications development are included in the report. It is available here.