Apple yesterday announced the iPad Pro, a supersized tablet with a relatively expansive 12.9-inch Retina touch screen (2732 pixels by 2048 pixels) and the ability to displaying two apps at once, courtesy of the company’s 64-bit A9X chip and iOS 9’s multitasking capabilities.

“iPad Pro is the most advanced and powerful iPad we have ever made,” said Philip Schiller, senior vice president of Worldwide Marketing for Apple, in a statement. “Its beautiful and large 12.9-inch Retina display has 5.6 million pixels and provides an immersive experience for content and apps.”

According to the Cupertino, Calif.-device maker, the A9X chip in the iPad Pro delivers 1.8 times the performance of the iPad Air 2 and provides enough processing power to edit multiple streams of 4K video or render 3D models. Battery life is rated at up to 10 hours. Built-in 802.11ac Wi-Fi with MIMO (multiple input, multiple output) antenna technology supports download speeds of up to 866 Mbps.

By comparison, the Microsoft’s business-friendly Surface Pro 3 tablet, which is due for a refresh, features a 12-inch screen and a resolution of 2160 pixels by 1440 pixels. Processor options include fourth-generation “Haswell” Intel Core i3, i5 and i7 chips running at up to 3.3 GHz.

The included Surface Pen stylus enables digital inking and note taking in supported apps. A built-in kickstand and the optional, backlit Surface Pro Type Cover allows the Windows tablet to double as a notebook, of sorts.

Apple, too, is courting keyboard jockeys with its new Smart Keyboard for the iPad Pro. Serving as a keyboard, cover and a tablet stand, the 4-mm-thick, $169 peripheral offers typists a QWERTY experience similar to that of Microsoft’s Type Cover.

Also debuted alongside the iPad Pro is the company’s take on the stylus, the Apple Pencil. Selling for $99, the pressure-sensitive stylus charges by plugging into the iPad Pro via a Lightning connector. A 15-second charge provides up to 30 minutes of battery life, according to the company.

Together, the new hardware adds up to a new front in Apple’s battle for the enterprise. “The innovative Apple Pencil and new Smart Keyboard enable users to customize their iPad Pro experience to the particular apps they use and the work they do, making iPad Pro ideal for everything from professional productivity to advanced 3D design,” said Schiller.

iPad Pro, along with the Smart Keyboard and Apple Pencil, go on sale in November. Prices start at $799 for the Wi-Fi model with 32 GB of storage rising to $1079 for the 128 GB model with LTE cellular connectivity. 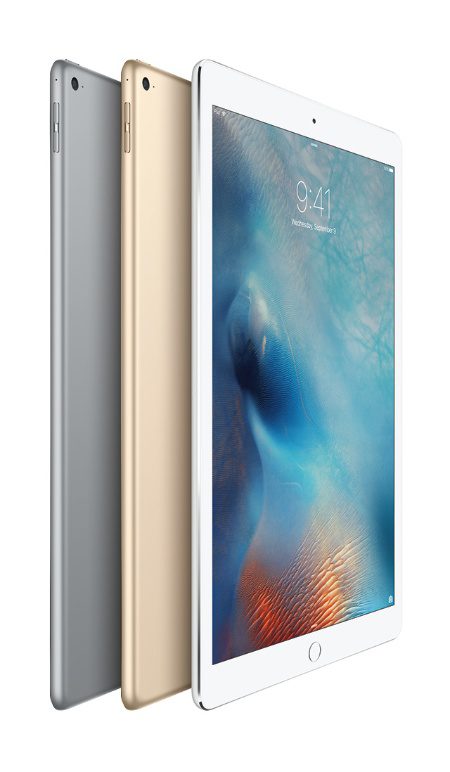