PC Shipments Rose in the U.S. During Q2

Despite the drop, the market actually beat earlier projections. IDC had originally forecast a 7.4 percent decline in PC shipments. The analyst group credits a rebound of sorts in the U.S. for the less than dire results.

“Our long-term outlook remains cautious. However, the strong results in the U.S. offer a glimpse of what the market could look like with pockets of growth and a stronger overall environment,” remarked Loren Loverde, vice president of Worldwide PC Trackers and Forecasting at IDC. “It’s not dramatic growth, but it could push the market into positive territory slightly ahead of our forecast for 2018.”

Chromebooks performed strongly in the education market, noted IDC research director Linn Huang. On the Windows front, PC makers are holding their breath, waiting to see if their commercial customers finally jump on Microsoft’s latest desktop OS. “The larger story remains whether an early wave of enterprise transition to Windows 10 could help close out a 2016 that is increasingly looking stronger in the U.S,” stated Huang.

In the U.S., PC shipments rose nearly 5 percent. HP and Dell battled it out for the top spot while Lenovo and Acer made solid gains, said IDC. 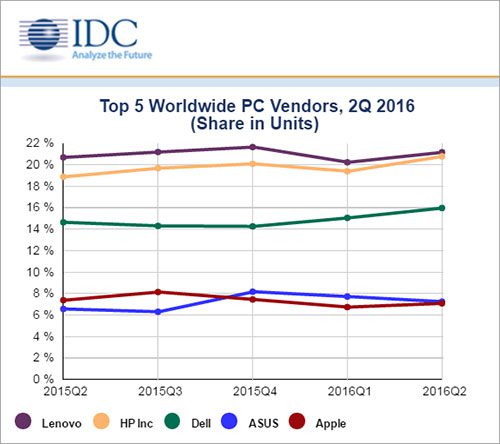 HP edged out Dell, shipping 4.7 million PCs compared to the 4.4 million PCs its rival managed to get out the door. Lenovo experienced a 14.7 percent year-over-year surge in PC shipments (2.4 million units) while Acer shipped 16 percent more units (889,000 PCs) than the same year-ago period.

Meanwhile, the industry is waiting to feel the repercussions of the Brexit vote in Europe. “Even the best case scenario calls for PCs to face significant challenges, with a somewhat fragile stabilization in the long run. The preliminary results did not capture the potential repercussions from the Brexit vote, which is expected to affect the timing and scope of spending plans in Europe,” stated IDC Worldwide PC Tracker research manager Jay Chou.

One of the missteps IBM made last century was collapsing their sales model, which was services based, to generate a short-term revenue spike. Up...
Read more
Big Data

What is Statistical Data Analysis?

What is a Virtual Data Room?

PITTSBURGH — A team out of Carnegie Mellon University is launching its automatic database-tuning product today with the help of $2.5 million in funding.   OtterTune,...
Read more
Applications

Professional services automation (PSA) software aims to offer service-based companies most of the software they will need to run their businesses in one package....
Read more
Big Data

What is Data Aggregation?

Data aggregation is the process where raw data is gathered and presented in a summarized format for statistical analysis. The data may be gathered...
Read more
Cloud

One of the missteps IBM made last century was collapsing their sales model, which was services based, to generate a short-term revenue spike. Up...
Read more