Worldwide IT Market Lifted by Cloud and Mobile

Worldwide spending on IT products will reach $2.1 trillion in 2017, a 4.5-percent increase over last year, predicts IDC. Taking telecommunication services into account, the overall information and communication technology (ICT) market will reach $3.5 trillion this year.

Cloud providers are slated to increase their server spending by four percent this year and five percent in 2018. During the latter half of 2017, the availability of newer server and storage systems is expected to spur demand among enterprise IT departments.

Infrastructure-as-a-service (IaaS) providers will also rake in the dough. IaaS spending is poised to surpass the $25 billion mark is year and $50 billion by 2020.

In the mobile space, new flagship phones and continued growth in emerging markets will drive sales during the second half of 2017. Smartphone revenues will total $439 billion by the end of 2017, a seven percent improvement. 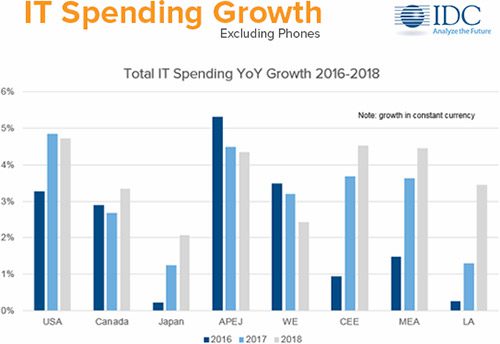 “Cloud and mobile are still the big drivers for IT spending, despite the attention devoted to new technologies like augmented reality, artificial intelligence, and robotics,” noted Stephen Minton, vice president of Customer Insights and Analysis at IDC, in a statement. “New technologies will drive a larger share of market growth in the next 5-10 years, but the short term will also see a resurgence of growth in markets tied to 3rd Platform opportunities, including cloud services, mobility, and big data.”

Spending on software will increase seven percent this year to reach $471 billion as businesses continue to pour funds into big data, analytics and cloud-delivered software-as-a-service (SaaS) solutions. The IT services segment is predicted to post sales gains of three percent.

Not every IT segment will emerge a winner in 2017, however.

“High-end servers are expected to post another year of double-digit decline this year, while hardcopy peripheral spending will fall for the second year in a row,” Minton said. “Overall tablet spending will also decline again, despite improving sales of hybrid and detachable models, while sales of traditional PCs and external storage systems will be broadly flat.”

Regionally, China and India will take the lead in IT spending growth with a gain of 10 percent this year, according to IDC. The U.S. will see gains of four percent, followed by Western Europe (three percent), Canada and Japan (two percent each).