It’s safe to assume that serverless cloud computing adoption rates are heading up toward, well, the clouds. (Sorry, I couldn’t resist.) But various surveys – see below – show that serverless is still a nascent tool in cloud development.

First, some backstory. Hype abounds in the coverage of serverless and the wonders that it works. Adopting serverless lowers costs, speeds deployment, increases scalability, decreases management time. It might even help you cook the perfect egg.

Significantly, serverless supports microservices and DevOps. And it’s beloved by developers, who have an outsized role in driving tech adoption.

As serverless gains steam, some observers opine that there’s a serverless vs. container debate. Yet certainly containers will be a factor for the foreseeable future. If you doubt that, check this nugget from Bernard Golden on A Cloud Guru. He noted that Tim Wagner, general manager of AWS’s serverless platform Lambda, “acknowledged the widely held suspicion that Lambda operates by dynamically loading containers and running the code inside of them.”

The word “dynamic” is key here. Serverless is a dynamic system of allocating the exact level of compute resources needed for an application in the cloud – no more, no less. A developer’s code triggers a function that is executed with the precise resources. Hence the name, Functions as a Service, FaaS.

Cloud already lessened the headaches of managing your tech platform; serverless reduces the burden even more. Plus you’ll hear countless stories of cloud customers using serverless to lower costs. Fewer virtual machines are spun up and not used.

So given that serverless is a huge step forward in cloud, has everyone rushed to adopt it?

Serverless Adoption: Cloudy with a Chance of Brilliant Sunshine

A number of surveys look at serverless adoption from various slants. None yet provides a comprehensive survey of overall adoption rates.

This is likely due to the relative newness of serverless. AWS debuted serverless in late 2014 with the launch of Lamba. The competing cloud vendors all jumped on board in 2016: IBM offers Cloud Functions (based on OpenWhisk), Microsoft has Azure Functions, Google touts its Cloud Functions. Expect an ecosystem to thrive around these main tent poles. For instance, IOpipe is a metrics and monitoring service for Lambda. Bitnami’s Kubeless enables applications with FaaS on top of Kubernetes.

Cloudability spotlights growth rates in use of AWS Lamba and Azure Functions, which are currently the leading serverless providers.

Looking big picture, Cloudability says that “cloud adoption has only scratched the surface in the IT infrastructure market; it’s estimated that only 10% of all workloads have moved to the cloud…it’s clear that ‘lift-and-shift’ migrations continue to dominate cloud adoption.”

The lift and shift crowd (a simple move to the cloud with little re-architecting) are not big users of serverless, so this suggests low FaaS adoption.

A New Relic report from Feb 2017, Achieving Serverless Success with Dynamic Cloud and Devops, surveyed 500 people knowledgeable about their organization’s cloud strategy. The report divides respondents between “dynamic cloud” users (who use tools like DevOps and containers) and “static cloud” users (who are merely lift and shifters). It’s not clear from the report what percentage of users are dynamic and which are static. However, “relatively few respondents report that the majority of their strategic workloads are currently running completely in the public cloud.”

Of dynamic cloud users, 43 percent are using serverless in production. Which means that less than half of even the forward-looking cloud users have adopted serverless. 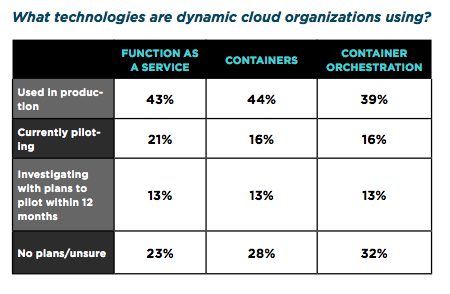 The New Relic report indicates that container use and serverless use are essentially equal among advance cloud customers.

New Relic reports that serverless is still the province of the early adopters: some 13% of dynamic users are merely “investigating” serverless, and 23% aren’t thinking about serverless at all.

Surely serverless adoption has risen in the year since the report. But still, these numbers say that serverless remains closer to nascent than established.

More recently, Slashdata’s State of the Developer Nation, from Q417, surveyed almost 22,000 developers across the globe. The report shows – no surprise – that AWS Lamba holds the largest market share among developers who use serverless.  Given that Azure and Google Cloud both launched their serverless platform after AWS’s, this race may be closer than it appears. The State of the Developer Nation report shows the broad cross section of serverless offerings.

The report notes: “More than 60% of all serverless users are aware of at least the top three vendors.” Yet this actually suggests remarkably low awareness. Almost 40 percent of developers didn’t know – as recently as Q417 – that all three major cloud vendors offer FaaS. This is still a very new market.

Also notable: beyond the top three cloud vendors, the most common adoption platform for serverless is “we host this in our own data centre.” Who says private cloud is dying?

Developer Nation notes that 19% of backend developers are using serverless, about the same as the 20% who use VMs on IaaS.

The report makes a key point: serverless is geared for new apps that have been coded for it. It isn’t a natural fit for the legacy apps that make the world go round. This puts a ceiling on current severless adoption, though it suggests future growth as more new apps are coded with serverless in mind.

Finally, a look at revenue numbers reveals the sharpest uptrend for serverless. A report on ResearchAndMarkets.com, from February 2017, estimates that the FaaS market will grow from $1.88 billion in 2016 to $7.72 in 2021 – a blistering compound annual growth rate of 32.7%.

The report references a central complaint about serverless, that the top cloud vendors are developing serverless with an eye toward vendor lock-in; the various system aren’t interoperable. It notes: “application portability issues on cloud environments acts as a major restraint in the overall growth of the [FaaS] market.”

It’s slightly odd that the report refers to “FaaS vendors,” a category that in 2018 isn’t top of mind for customers. Is there a single customer out there who says to themselves, “We need a FaaS vendor – let’s shop for one.” Probably not. Serverless is still seen as an add-on feature to the larger purchase decision.

At any rate, here’s the report’s list of FaaS vendors: