OpenStack Boldly Going Where No Cloud Has Gone Before (Mars)

VANCOUVER, BC – OpenStack’s Nova compute project originally began as the Nebula project at NASA. At the OpenStack conference here, Jonathan Chiang, IT Chief Engineer at NASA JPL detailed how the space agency is now using OpenStack in its effort to land humans on Mars.

“NASA is a place where we dare mighty things,” Chiang said.

Chiang explained that JPL is a leading center for the robotic exploration of the solar system. He noted that there has been a robotic presence on Mars since 1976. Since then an increasingly complex array of spacecraft have landed on Mars.

Chiang also highlighted a number of efforts that NASA has underway as the space agency aims to deliver on President Obama’s mandate to bring humans to the surface of the red planet. One such mission is the Europa Clipper, which is a robotic craft headed to the moons of Jupiter in a search for life. Additionally there is a NASA asteroid redirect mission in the planning stages that will see a spacecraft intercept, retrieve and bring an asteroid to the moon’s orbit where it can be further analyzed and explored.

Overall Chiang emphasized that there is a lot of technology needed to bring humans to Mars and the process to develop all that technology generates lots of data. Chiang said a modern orbiter can generate as much as 80 terabytes of data every day.

The challenge for JPL is that it has a limited financial budget as well as limited data center real estate. Chiang said that the JPL cannot expand its data center’s physical footprint, which is where OpenStack is now playing a key role.

For each mission, JPL needs to figure out capital expenditures before a mission and will often buy hardware in advance to support it. Not all of the hardware is always active, especially in the planning stages, so there is a need to achieve greater operational efficiency from money that has already been spent. 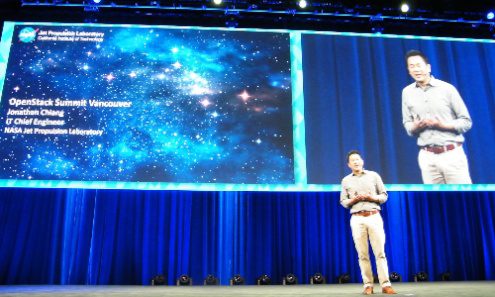