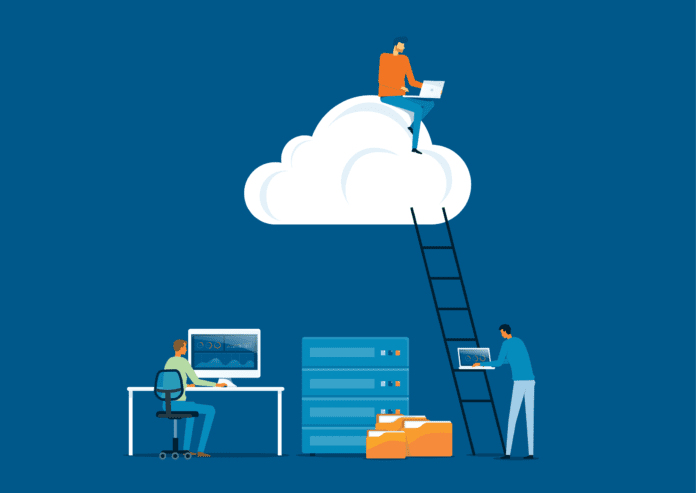 Hybrid cloud is the combination of on-premises and cloud-based IT infrastructure. Public cloud, private cloud, and on-premises infrastructure are connected, working in tandem and allowing applications to run in multiple different environments simultaneously.

Companies use hybrid cloud models to enhance agility and flexibility, dividing the workload and data deployment. They offer the benefits of both on-premises and cloud-based IT resources, while minimizing the drawbacks of both.

See below to learn all about the global hybrid cloud market:

In terms of industry demand, the retail sector has one of the highest rates of hybrid cloud deployment at 21%, with 91% of companies surveyed in the sector calling hybrid solutions ideal.

Other leading industries for hybrid cloud include:

The future of hybrid cloud

In a survey done by Hornetsecurity, covering over 900 IT professionals in Europe and North America, it’s estimated that 93% of businesses are going to adopt hybrid cloud solutions within the next five years.

Twenty-eight percent of respondents reported that they’ll mostly use on-premises IT resources with two or fewer workloads in the cloud. The primary concerns companies had with hybrid cloud were security, cost, and data control.

Public cloud IT models offer on-demand computing services where the third-party owns and manages the physical resources and rents them to multiple end users at the same time.

In order to be categorized as a hybrid cloud, the private and public clouds and on-premises infrastructure need to be connected and work as a single environment. The connection is established through a wide area network (WAN), depending on the company’s needs and requirements.

“In a hybrid cloud environment, the new challenge is to ensure the highest levels of end-user experience and quality of service before, during, and after workload migration cycles,” says Bruce Kelley, a member of the Forbes Technology Council.

”To do so necessitates careful planning before migration, extensive monitoring through the execution phase, and continued analysis afterward for adjustments as needed.”

Other hybrid cloud benefits include:

The following case studies show how organizations in differing industries are using the flexibility and versatility of hybrid cloud solutions:

Bharti Airtel is a multinational telecommunications company based in New Delhi. They’re one of the leading providers of information and communications technology (ICT) services, offering their clients in over 18 countries access to a wide portfolio of services across South Asia and Africa.

In a competitive market, Airtel needed to prioritize flexibility and growth in their corporate network. Airtel opted to focus on developing new business solutions instead of managing its system on-premises.

By entering a 10-year agreement with IBM, alongside Red Hat, Airtel was able to digitize its infrastructure, while minimizing their loss of control. Their hybrid cloud solution with IBM enables them to offer a better customer experience and aims toward profitable growth.

“As part of our endeavor to build a 5G-ready network for India’s requirements, we are pleased to collaborate with IBM and Red Hat in our cloud journey,” says Randeep Sekhon, CTO, Bharti Airtel.

“The hybrid cloud architecture will resonate with our customer obsession by providing improved flexibility, network stability, and performance and bringing agility and automation in our network operations.”

Airtel was able to process 1.5 million new customers per month and outsource technology to focus more on growing their business in the region.

Wayfair is a furniture and home goods retailer and online store with over 20 million products sourced from 16,000 suppliers. With headquarters in both Boston and Berlin, Wayfair employs around 17,000 workers in the U.S. and Europe.

Wayfair regularly offers significant discounts on their products in holiday and discount seasons. However, the variable influx of traffic the company faces puts immense pressure on its on-premises data centers and IT infrastructure.

To further expand the company, Wayfair needed a resilient alternative that’s flexible and highly scalable. Wayfair had their in-house data scientists and engineers develop and maintain a custom solution, and they chose Google Cloud to host the new platform.

“In Google Cloud, we were able to reduce and eventually eliminate the need for change freezes leading up to big events. Our automation systems signal the cloud to scale on demand and therefore, handle the peak load while remaining stable and performant,” says Steve Crusenberry, VP of infrastructure and platform engineering, Wayfair.

“We no longer have the same concerns about a software release or infrastructure change adversely impacting our customer experiences.”

Wayfair was able to save costs on a day-to-day basis by no longer needing to purchase additional server capacity. They were also able to use Google Cloud’s Smart Analytics platform to generate real-time insights from their data.

Axians was looking for a more stable IT platform where performance, cloud integration, and storage efficiency are the main focus. The company also wanted built-in management and reporting tools that are compatible with Axians networking and Cisco servers.

“We replaced two entire racks of our legacy disk-based storage system with one shelf of NetApp All Flash FAS, and we cut our power and cooling costs by 66%,” says Erik Sohlman, CTO, Axians.

“What I really like about NetApp is the modular, scalable, and flexible functionality that is easy to tailor for us and our customers’ needs.”

Axians was able to automate workflows, integrate cloud environments, and implement broad functionalities into its systems with high efficiency.

Some of the leading vendor in the hybrid cloud market include: