Cloud IT Infrastructure Accounts for Nearly 40% of All IT Spending

The cloud’s insatiable appetite for faster servers, bigger storage and high-performance networking, is lifting the fortunes of many technology vendors. In fact, sales of cloud IT infrastructure now represents nearly two fifths of all IT spending, according to technology research firm IDC.

During the first quarter (Q1) of 2017, vendors of cloud IT infrastructure – a category that includes servers, storage systems and Ethernet switching equipment – generated $8 billion in revenue, a 14.9 percent year-over-year increase. As a share of all IT spending worldwide, the category accounts for 39 percent compared to 33.9 percent in Q1 2016. 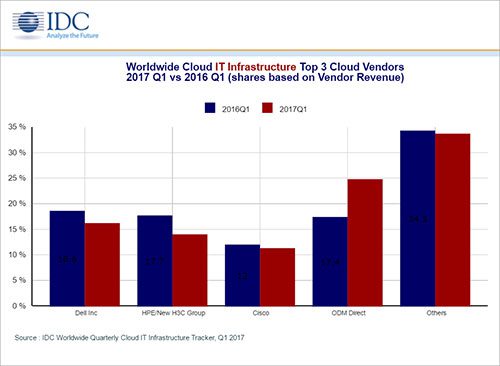 “After a weak performance during 2016, storage purchases for cloud IT environments had a strong rebound in the first quarter, driving the overall growth in this segment,” said Yezhkova in a statement. “Overall, the first quarter set a strong beginning of the year for the cloud IT infrastructure market. With positive dynamics in purchasing activity by hyperscalers across all technology segments we expect a strong year ahead for the fastest growing public cloud segment.”