Amazon Fends Off the Cloud Competition

Amazon is the number one cloud provider, and barring some major and unforeseen market shifts, the company will remain number one for a very long time.

After analyzing the first quarter 2017 financial results of the leading cloud companies, Synergy Research has once again crowned Amazon Web Services the champion. “While AWS remains in a field of its own and is maintaining a steady market share in a rapidly growing cloud market, there is a chasing group of five major cloud providers, each of which is achieving growth rates far higher than AWS,” said John Dinsdale, a chief analyst and research director at Synergy Research Group, in an email sent to Datamation.

Despite monumental gains by its rivals Microsoft, Google and Alibaba, each of which notched annual growth rates of at least 80 percent, Amazon remains comfortable in the lead. “The law of large numbers almost dictates that AWS growth rate has to moderate, but it does continue to grow at a similar pace to the overall market and is therefore maintaining its overall market position. It remains substantially larger than its next five competitors combined.” 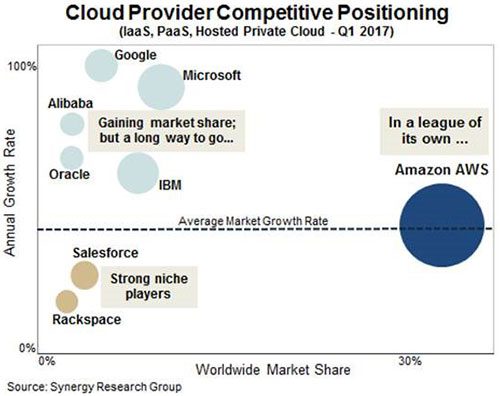 Earlier this week, Amazon reported revenue of $35.7 billion for the first quarter of 2017, a year-over-year gain of 23 percent, and earnings per share of $1.48. AWS sales surged by 43 percent on an annual basis to nearly $3.6 billion.

Cloud sales are also up at IBM. Big Blue recently reported that its cloud revenues had grown 33 percent to $3.5 billion, a 33-percent improvement. “In the first quarter, both the IBM Cloud and our cognitive solutions again grew strongly, which fueled robust performance in our strategic imperatives,” said Ginni Rometty, president and CEO of IBM, in prepared remarks.

All told, Synergy estimates that the cloud infrastructure market, including infrastructure as a service (IaaS), platform as a services (PaaS) and hosted private cloud, is generated $10 billion is growing annually at 40 percent. Generally, businesses flock to AWS, Microsoft and Google for their IaaS and PaaS needs while IBM is the go-to vendor for hosted private cloud services.