Soft Skills: An IT Career Must-Have

Offering a glimpse into next year’s IT job landscape, Spiceworks just released its 2017 Tech Career Outlook report. In a survey of 476 IT professionals, the company discovered that soft skills, like good communication skills, were among the most sought after by IT professionals.

“IT professionals recognize soft skills are important to have, especially because they can help with the common challenge of getting management to understand the importance of IT priorities,” Peter Tsai, IT analyst at Spiceworks, told Datamation. “However, in the face of ever-increasing corporate data breaches and cyberthreats, the number one skill IT professionals plan to improve in 2017 is their cybersecurity expertise.” 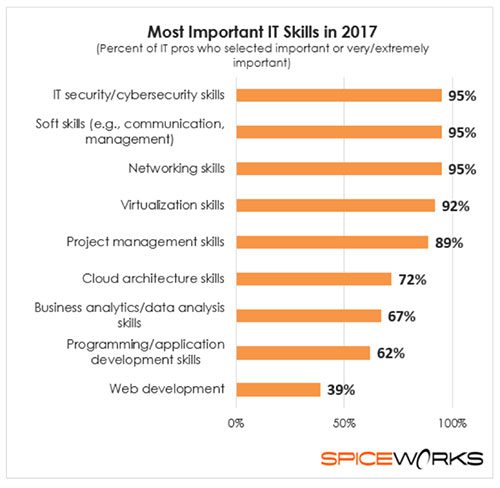 “Recent events have made it painfully clear that security expertise is needed in every industry, putting IT professionals with security skills in high demand,” continued Tsai. “And because money talks, often underpaid IT pros are more eager to advance their cybersecurity skills to find higher salaries and more fulfilling work.”

In fact, many IT workers are already eyeing the exits.

Among those who plan to bid their current jobs farewell, 64 percent said they were seeking a salary increase. Interestingly, 69 percent are making the move to advance their IT skills, which in turn can help them land better-paying jobs in the future.

Overall, most IT workers (61 percent) feel appreciated by their employers and the workforces they so dutifully serve. But gratitude alone can’t pay the bills. Nearly the same number of those valued IT pros (59 percent) said their paychecks fall short of what they’re worth.

Ultimately, the 2017 IT career forecast is mixed. Job seekers can at least take solace in the continued strength of the IT job market, enabling them to land both rewarding and higher-paying jobs.