Interest in blockchain technology has reached a fever pitch. According to Gartner, “As of February 2017, ‘blockchain’ was the second most-searched-for term on Gartner.com, having increased in volume by 400 percent in the last 12 months. Between 2015 and 2016, the number of Gartner client enquiries grew by more than 600 percent.”

For those who haven’t yet heard the hype, blockchain is a type of distributed database or ledger. It was designed to record transactions related to the cryptocurrency Bitcoin so that they would be impossible to change or erase once they were recorded (although it’s possible that future versions of blockchain might be editable in extraordinary circumstances). It is extremely secure and highly resilient.

Those capabilities have some obvious applications related to banking and finance, but many other industries are investigating blockchain as well. The technology could someday be used for smart contracts that would allow businesses to pay one another without an intermediary payment processor, to track digital rights for movies and music, to record patient health data or to monitor supply chains and shipments of goods. In fact, there are so many potential uses for blockchain technology that the World Economic Forum (WEF) considers it the second generation of the Internet and “the foundational platform of the Fourth Industrial Revolution.”

However, even the most devoted proponents of blockchain admit that it will likely be quite some time before the technology becomes pervasive. Here are nine predictions about how the blockchain market is likely to evolve over the next few years:

Blockchain’s roots in cryptocurrency make it all but inevitable that banks, insurance agencies and other financial firms will be among the first to use blockchain technology. And PwC’s 2017 Global Digital IQ Survey found that 9 percent of the financial services firms surveyed were already making substantial investments in blockchain, while 36 percent expected to do so within the next three years.

Blockchain could dramatically reduce the amount of time it takes to settle transactions from days to mere seconds, and at the same time it could add an unprecedented level of security. In addition, some research indicates it could slash costs by billions of dollars. Many within the banking sector believe blockchain will open up entirely new business models, and the race is on to be among the first to successfully deploy the new technology. As a result, Accenture predicts that blockchain will be considered mainstream throughout the financial industry by 2025.

2. More Blockchain Use Cases Are on the Way.

In an attempt to aid the spread of blockchain, the Enterprise Ethereum Alliance, one of the industry groups promoting blockchain, recently set up a number of working groups to study the technology’s applications in areas like healthcare, insurance, advertising, supply chain and the legal industry.

Experts say blockchain’s ability to manage smart contracts could make it well suited to manage digital copyright and that it could be particularly beneficial for streaming services. Also, many types of companies are considering how blockchain might prove useful for the Internet of Things (IoT), perhaps enabling secure payments directly from consumer devices or even enabling machinery within factories to order and pay for their own spare parts when they need them.

3. Countries Are Considering How to Regulate Blockchain.

Most national governments haven’t yet established rules governing cryptocurrency or other blockchain applications — and that is both a blessing and a curse for blockchain advocates. On the one hand, startups are free to innovate however they like, but on the other hand, more established companies are hesitant to embrace the technology until they know exactly how it will be governed and how much risk will be involved.

Some government agencies and international organizations have already begun preliminary work toward regulating blockchain. For example, earlier this year, Japan began recognizing bitcoin as legal currency, and the WEF has published a lengthy study on the likely impact of various methods of blockchain governance. Within the U.S., some agencies, including the IRS and the Federal Election Commission, have policies on virtual currency, but the nation lacks an overarching policy. It seems extremely likely that both U.S. and international efforts to regulate blockchain will continue, perhaps with more legislation passing this year.

Venture capitalists have been rushing to fund blockchain-related startups. According to Coindesk, investors have poured nearly $1.8 billion into the market. In 2016 alone, blockchain startups secured more than $501 million in funding, and the total for 2017 already tops $303 million. 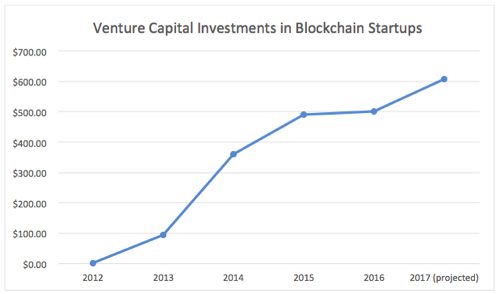 Of course, startups aren’t the only ones working on blockchain. Many established technology firms have announced blockchain projects as well. For example, IBM recently rolled out a new mainframe designed to handle blockchain and encrypted transactions, and Microsoft Azure offers a cloud-based blockchain service. Many others have joined industry organizations focused on improving and standardizing the technology.

5. Ethereum Will Grow in Importance.

One of the most exciting projects within the blockchain space is Ethereum. Somewhat confusingly, Ethereum is both the name of a cryptocurrency that competes with bitcoin and an open source development platform for creating blockchain-based applications, such as smart contacts and smart wallets. In CoinDesk’s State of Blockchain Q1 2017 report, 94 percent of the blockchain enthusiasts surveyed said they feel positive about the current state of Ethereum, about twice as many as said the same thing about bitcoin. The report also pointed out that the market cap for the Ethereum cryptocurrency increased 499 percent between the fourth quarter of 2016 and the first quarter of 2017, reaching $3.6 billion.

While bitcoin can only be used for cryptocurrency, Ethereum potentially has many other uses. In addition, the fact that it is open source is attractive to many organizations. And leading firms such as Accenture, BP, Credit Suisse, ING, J.P. Morgan, Intel, Microsoft, UBS and many others have joined the Enterprise Ethereum Alliance.

6. Companies and Standards Organizations Will Push for Blockchain Interoperability.

A major focus for the Enterprise Ethereum Alliance, Hyperledger, the Wall Street Blockchain Alliance (WSBA) and similar organizations is the development of standards that will enable blockchain interoperability. If companies can coalesce around a particular standard, it could speed the acceptance of blockchain-based payments, currency and other solutions.

CoinDesk’s State of Blockchain report notes, “As more and more blockchains, cryptocurrencies, tokens and distributed ledger systems launch and prosper, it’s becoming [increasingly] obvious that we have created a whole new web of decentralized technologies, forming the backbone of an entirely new economy, information network and source of truth. We have seen a push and trends towards ‘interoperability’ to take full advantage of the diverse innovations across the ecosystem.”

Many of the technology companies currently working on blockchain projects are looking for ways to make blockchain transactions even faster and more scalable. Two of the most notable efforts in this space include Raiden, which enables high-speed asset transfers, and Lightning, which focuses on scalable instant transactions. Many other projects are also focused on improving the technology.

8. Demand for Blockchain Talent Will Skyrocket.

IT unemployment is perennially low, and demand for developers and other workers with blockchain experience is likely to increase rapidly as the technology takes off. However, few universities offer blockchain courses within their computer science departments. The exceptions include prestigious institutions known for computer science research, such as Stanford University, Massachusetts Institute of Technology and the University of California, Berkeley. In addition, a few online education sites offer cryptocurrency or blockchain training. However, these opportunities are falling far short when it comes to meeting the demand for trained professionals. Some say that experienced blockchain engineers are already commanding salaries around $250,000 per year.

One other prediction for the future of blockchain that is worth mentioning is the impact it could have on emerging markets. Writing for the Harvard Business Review, Vinay Gupta and Rob Knight theorize that blockchain and cryptocurrency could help the developing world leapfrog past more developed economies. A similar phenomenon occurred in many parts of Africa when cell technology became commonplace in areas without landline telephone service. They hypothesize that blockchain could help advance banking in areas underserved by traditional financial services.

Whether those theories come to fruition or not, it seems likely that blockchain will have a major impact on the global economy. For now, the future of blockchain looks exceptionally bright.