Ubuntu, openSUSE and the Definition of Easy

To hear fans talk, without Ubuntu, Linux desktops would be still be basic window managers. Even Mark Shuttleworth, Ubuntu’s founder, recently implied that those who questioned him held the view that “Linux is supposed to be hard so it’s exclusive.”

Such attitudes always remind me of how the Soviet Union once claimed to have invented every major scientific theory and new piece of technology in the twentieth century. True, Ubuntu did increase awareness of usability on the Linux desktop, but that does not mean that Ubuntu and its Unity desktop have a monopoly on usability.

The truth is, long before Ubuntu, other distributions were stumbling towards usability. Although Ubuntu’s ability to grab headlines accelerated their progress, other modern distributions have arrived at very different usability philosophies than Unity.

Some of the usability details of other distributions seem superior to Unity’s while others are inferior. But observing them debunks any idea of the objectivity of usability theory.

The question arises, “Easy for whom?” The new user, who, given the ubiquity of computers today, may be overdue to appear in the CITES Appendices as an endangered species? Or for regular users whose main priorities are productivity and working the way they prefer?

Such questions inevitably came to mind last week as I followed Ubuntu’s usual course through the free software media while exploring the release of openSUSE 12.3.

Many may have forgotten, but fourteen years ago, SUSE was where Ubuntu is today. Especially in Europe, SUSE was considered the most usable desktop Linux available, and its cliques of users around the world could be every bit as devoted to it as Ubuntu’s are today.

That was some time ago, but openSUSE remains a major distribution. Available in both GNOME and KDE installation versions, it offers alternative views of usability to the one presented in Unity. That is particularly true in the KDE version, which from installation and first impressions to desktop features and philosophy offers a package that is often no less usable than Unity — although it is very different.

The main difference between Ubuntu’s and openSUSE’s installers is the details. Both installers require minimal input from users and have text-based modes for more customized setups. The options vary — for instance, Ubuntu offers to encrypt the home directory, while openSUSE offers a choice of a desktop. However, these differences do not favor one over the other.

At the most, openSUSE’s installer has a small edge in that its help function is placed directly in the dialog window, making it quicker and easier to access. 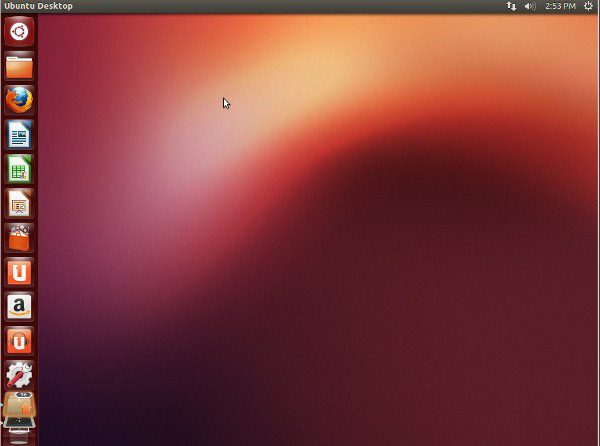 At first, the two desktops appear radically different. However, that impression is due chiefly to the default wallpapers — Ubuntu’s colorful gradient and openSUSE’s basic black. Which users prefer is entirely a matter of taste, and, at any rate, the wallpaper is usually the first part of the desktop that any user changes. 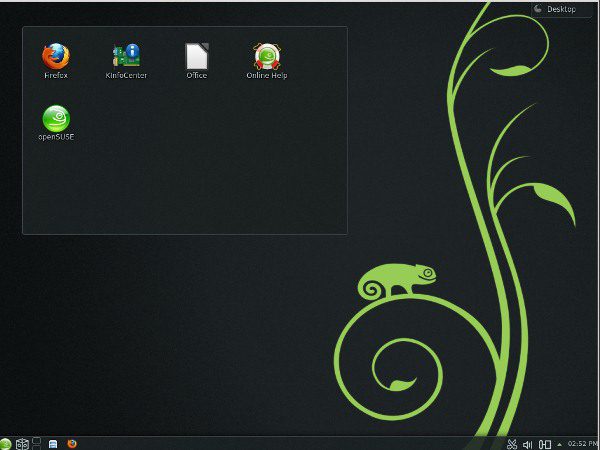 The only problem is that, once the screen is closed, some of its most useful features, such as the link to an introduction of the KDE 4 desktop, are buried a couple of clicks down from the desktop, where users may take some time to find them. All the same, Unity has no equivalent to openSUSE’s welcome screen, perhaps out of the belief that it is too simple to require a similar guide.

Users may also take a while to find openSUSE’s main menu on the bottom left of the screen. The link to Unity’s dash at the top of the launcher is far more conspicuous. Even though openSUSE’s menu is placed exactly where experienced users would expect it, its icon is too small and too undifferentiated to bring it immediately to notice.

Nor is the difference in applications apt to seem that large. Some default applications, like LibreOffice and Firefox, are identical. The system settings and software installers are also similar, although openSUSE’s are not only less glossy, but sometimes less graphical, especially when you choose Yast rather than some of the alternatives for package installation and system updates.

Others show the difference between GNOME’s preference for minimalist features and KDE’s tendency to throw every possible feature into each dialog, but otherwise offer the same basic functionality. The resemblance, of course, would be even closer if you choose to install the GNOME desktop on openSUSE, since Unity is a shell for running GNOME.

Otherwise, for the first few minutes, the experience on both Ubuntu and openSUSE is so similar that you might wonder why anyone would bother to mention the minor differences.

The differences between openSUSE and Ubuntu only start to emerge as you explore the desktops. Then, very quickly, the difference in design philosophy emerges. On the one hand, Unity emphasizes the simplest usec ases while radically pruning everything else. On the other hand, openSUSE — or, more accurately, KDE 4.10 — allows multiple workflows, and rarely misses a chance to encourage configurability.

Another way of expressing these differences is to say that KDE remains rooted in the traditional general purpose desktop that free software has evolved over the years.

To anyone who has struggled with Folder Views, that might seem a surprising statement. However, once you realize that Folder Viewers are mechanisms for supporting multiple icons sets, it soon becomes clear that the main difference between modern KDE and KDE3 or GNOME2 is the structure. Once KDE4 is set up, it offers the same basic functionality as either of these two earlier desktops.

In such a desktop, the idea is to provide all-purpose settings for every usecase. If the desktop is not ideal for any particular circumstance, at least it will usually be adequate.

In openSUSE, most windows open so that they fill 40 percent of the screen. This average makes working in multiple windows relatively easy, and reduces the amount of adjustment necessary before you settle in to work.

By contrast, Unity is designed for the simplest usecase. It opens most windows full-screen or close to it. The assumption seeming to be that users will usually open only one window at a time.

If you work that way, you are likely to have no trouble with Unity. The difficulty comes when you want to change window sizes. Then you have to slide the cursor into the corner by degrees until the appearance of two arrows tells you that you are now in the exact position to drag the window into a new size.

The same logic may also help to explain why the title bar buttons in Unity have been moved to the left from their usual position on the right, and may disappear altogether until you move the mouse to where they should be. Shuttleworth has sometimes hinted that this change is for some mysterious future purpose, but the apparent assumption is that the title bar buttons don’t matter much because you aren’t likely to be needing them very often anyway.

openSUSE’s KDE, by contrast, keeps the title bar buttons where most users expect to find them.

In addition, because it is a generalist desktop, it offers options for changing appearance everywhere. Unlike in Unity, openSUSE’s panel can be altered with several dozen widgets. Icons for applications can be placed on the desktop, even though features like Activities encourage task-based workflows. By comparison, Unity’s way of encouraging task-based computing is to allow icons only for folders and documents to be placed easily on the desktop, a choice that seems more restrictive than useful.

When you place the two desktops side by side, the same differences in design appears over and over. In openSUSE, you have the choice of several menus, as well as equivalents like Krunner, while in Ubuntu only the dash is available — as though, having chosen an application or file once, you are unlikely to choose another for some length of time.

The options for displaying desktop icons, for displaying open windows on the taskbar, even those for the desktop clock — wherever you go in openSUSE, they consistently outnumber those available in Unity’s equivalents. Often, Unity’s approach is so reductionist that you might wonder whether it is shaped by the belief that too many options will only confuse users.

By using KDE, openSUSE does miss out on some of Unity’s elegant features, such as the use of arrows by launcher icons to indicate which are currently open and/or active. But, in general, the KDE interface gives users possibilities about how to work, while Unity tells users how they should work according to a theoretical optimum.

Perhaps that is why Unity offers little new functionality. The intention of its design is to reduce functions, not to add them. The one place it innovates is in the placement of online search results in the dash, and that is more of a commercial innovation than a functional one. After all, how often does anyone want online searches when they are trying to locate applications or files on the hard drive?

The nature of innovation is very different in KDE. Using Folder Views to change icon sets extends the traditional generalist desktop without altering it. In fact, users can ignore the extension altogether if they choose.

The same is true of Activities, the extension of virtual workspaces that allows users to maintain completely separate desktops for different tasks, down to the icons and widgets on them.

For someone who has never used a computer (if such people still exist), perhaps Unity might be easier to learn. However, for intermediate users, who have developed their own preferences about how to work, openSUSE’s KDE is easier to use. openSUSE users may take longer to configure their desktop than Unity’s users, since they have more they can choose to configure, yet the end result is more likely to be a desktop that is easier to use — for them, if for no one else.

Using the GNOME version of openSUSE would lead to a somewhat different discussion, since GNOME’s developers embrace similar design principles as Unity’s developers. However, in its own way, GNOME is as concerned with usability as KDE is. In fact, while I chose openSUSE as an example because of its recent release and former reputation, I could have reached a similar conclusion with any number of distributions.

Ubuntu’s claim to be a leader in usability is understandable. Shuttleworth and his employees at Canonical Software have spent considerable effort on usability and developing their concept of what works. By some interpretations, they may be literally betting the company on the belief.

However, except here and there, the claim that they have produced something unique is hard to substantiate. Since they are all based on free software, Linux distributions borrow freely from each other. Nor can any developers of modern desktop environments afford to ignore usability — even the makers of retro-desktops like Cinnamon or Mate are more or less consciously choosing to continue the tradition of the generalist desktop. In part because of Ubuntu, every major Linux distribution today is thinking about usability, although their conclusions can be very different.

In the end, the trouble with usability is that while its theorists use the language of scientific principle, the truth is that it is in many ways subjective. I have no doubt that Ubuntu has the usability testing to prove its contentions about Unity, but such testing is notoriously open to self-fulfilling prophecies.

Nor do you have to think consciously about usability to develop a philosophy about it. All distributions develop their own usability philosophy, simply by choosing desktop environments and the apps for default.

This natural selection has been happening for more than fifteen years now. Its end result is that, while distributions like openSUSE have talked less in public about usability than Ubuntu, their latest releases are informed by usability every bit as much as Unity. The distinctions are strictly in details and usability philosophy.

Microsoft Build and the Hidden Benefits of Open Source