The last time KDE released a major revision of its interface, users protested bitterly, and the project took several years to live down the reaction.

Next time, you would expect that KDE would play it safer. And, at times, the newly released beta of the latest Plasma interface does just that. In many respects, it is more a matter of re-alignment and positioning than of overthrowing paradigms.

Yet, at the same time, some of the choices seem as likely to bewilder as assist users, at least in their present form. They make me wonder whether KDE might meet yet another round of hostile user reaction in what will eventually become either the latest round of releases in the fourth series, or else the first in the fifth release series.

The best way to view these mixed results is to download an image from Neon, a sub-project of Kubuntu which packages the daily development builds. Neon can be run as a live image, or installed to hard drive or a virtual machine using the icon in the Desktop directory labeled ubiquity-kdeui.desktop.

The Neon images are bootable, but be aware that the beta lacks many applications, utilities, and widgets that have yet to be re-written for the new interface. In particular, although Plasma is designed to swap out interfaces, only one is available in the beta — there is not even a Folder View to provide a classic desktop with icons.

Also, stability is haphazard. The beta is definitely for testing only, and you do not want to risk serious data to its frequent crashes. Still, enough of the desktop and its default minimalist theme are available to give a sense of how the new desktop will look and act.

KDE has been edging towards its next generation desktop for a couple of years now, gradually replacing existing components with ones written in QML and using the Qt5 toolkit. In the last couple of releases, the project has not updated the platform at all, confining itself to updated versions of applications and referring to “software compilations” in an effort to make what’s happening clearer.

For the last few releases, most KDE users have benefited from this transition without being aware of the changes. Under these circumstances, the first thing to observe about the beta is that it is subjectively faster than recent KDE releases when logging in or starting applications.

In fact, it is so much faster that when running in a virtual machine it appears faster than the host machine’s native operating system with six times the memory. Results may vary on different machines, but if my experience is at all typical, then nobody is going to refer to KDE as bloated ever again. 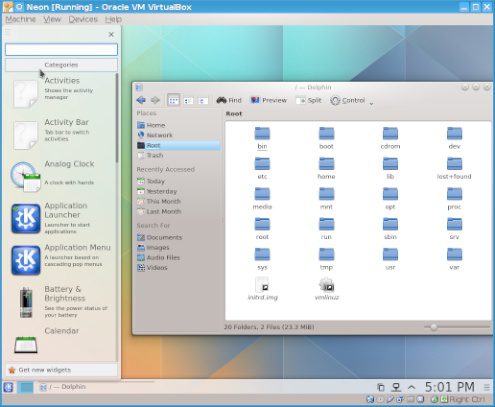 Tweaks around the interface

The Breeze Plasma theme is blocky, with stick-figure panel icons. The theme is not particularly to my taste, nor are the icons any easier to decipher than more elaborate ones. But it does create an impression of simplicity that newcomers might find reassuring.

However, themes can be changed. What is more noticeable are some of the other features as you explore.

For example, KDE is following GNOME’s and Ubuntu’s leads by adding a custom font to improve its branding. Called Oxygen, the font currently exists as a sans serif with bold and monospaced weights.

Oxygen is a geometric typeface, rather than a modern humanist one like GNOME’s Cantarell or the Ubuntu font, so it allows KDE to stand out from its rivals. More to the point, its simplicity calls less attention to itself while being easily readable on the desktop. Its monospaced weight is especially well-designed, with none of the awkward spacing or ugliness found in many monospaced fonts, and could easily become the choice of developers or others who work at the command line.

Another change is in the desktop toolkit. Once derisively referred to as cashew, it is now not only a rectangle, but positioned on the upper left, where users can find it and realize its functions. Actually, they will have no choice except to use it, since it is now the only place where you can log out.

The importance of the toolkit is also reinforced by having its lists of widgets and activities now display directly below it, making their relation to the toolkit clear.

Somewhat disappointingly, however, the lists are not on a spinner rack, the way that the one for activities is on the Plasma Active interface for tablets. These spinners remain by far the most space-conserving yet accessible way to present activities that KDE has tried so far, and why they are not used across the whole of KDE remains a mystery. However, at least the lists in the beta scroll vertically instead of horizontally, making them less awkward.

However, the most noticeable change is in the default menu. The current Kickstarter menu has been replaced by a much simpler interface that no longer duplicates the logging out options in the toolkit, and that no longer shows Favorites, Recently Used, or other views as options across the bottom.

In fact, the menu no longer even has a visible search field. Instead, if you want to search, you simply start typing. The result is a cleaner interface, but one I suspect may puzzle new users. Just as importantly the arrangement assumes that you already know what you are looking for, and gives you less chance to explore. Many users might well prefer the option of switching to a traditional cascading menu than deal with such a vagary.

Any alarm over the next version of Plasma would be premature. Presumably, much can happen between the first beta and the release candidate.

Moreover, the beta shows several healthy directions, especially the introduction of Oxygen as the default typeface. Compared to GNOME or Unity, KDE has traditionally paid little attention to interface design, sometimes leaving a dialogue window looking like a junk drawer for several releases before improving it.

Yet both GNOME and Unity have proved that too much attention to design can cause developers to pay less attention to users than to an abstraction of design, and to assume that they know better than users what they need. The arbitrariness of one or two choices currently in the Plasma beta raises the possibility that KDE might fall into the same traps.

Still, KDE is showing signs of caution, so it might manage its re-design better than its rivals did. So long as it retains other options — which so far it is doing –perhaps less than perfect defaults will be unimportant.

Yet, unless KDE developers are careful, the general release of the new Plasma could as much reason for disappointment as excitement. We’ll have to wait to see how the die comes to fall.