Vendors shipped 27.4 million wearable devices worldwide during the fourth quarter of 2015, a 126.9 percent year-over-year gain according to International Data Corporation’s (IDC) Worldwide Quarterly Wearable Device Tracker. For all of 2015, they shipped a total of 78.1 million units, a 171.1 percent increase over 2014’s figures.

In short, wearables are well on their way to going mainstream.

“Triple-digit growth highlights growing interest in the wearables market from both end-users and vendors. It shows that wearables are not just for the technophiles and early adopters; wearables can exist and are welcome in the mass market,” stated IDC research manager Ramon Llamas in a media advisory.

Though the market it on a tear, not everyone is having their vitals tracked or glancing at text messages on their wrists. For device makers, there are still opportunities to make a splash, suggested Llamas.

“And since wearables have yet to fully penetrate the mass market, there is still plenty of room for growth in multiple vectors: new vendors, form factors, applications, and use cases. This will help propel the market further,” he continued. 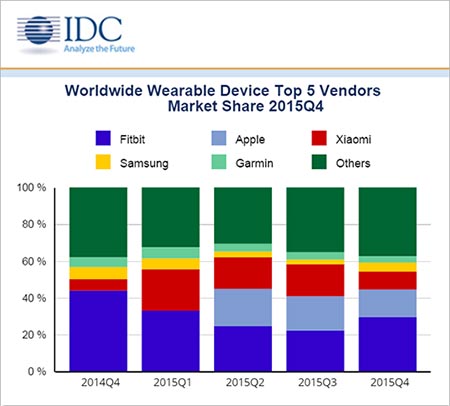 Fitbit won the fourth quarter, with shipments of 8.1 million units and a 29.5 percent share of the market. Apple claimed second place by shipping 4.1 million Watches and snagging 15 percent of the market. Xiaomi, Samsung and Garmin round out the top five.

For all of 2015, first-place Fitbit shipped 21 million units and walked away with nearly 27 percent of the market. China’s Xiaomi, a maker of low-cost fitness wearables, came in second with shipments of 12 million devices and 15.4 percent of the market. In terms of growth, Xiaomi was far and away the market leader in 2015 with a year-over-year growth spurt of 951.8 percent compared to Fitbit’s 93.2 percent bump.

“Xiaomi’s focus on inexpensive fitness trackers resonated within China, with prices far below the competition (as low as $11 USD), making the Mi Band an inexpensive purchase,” observed Gartner. “This allowed Xiaomi to have the largest year-over-year improvement of any vendor on our list.”

Apple, whose smartwatch shipped in late April, managed to take third place with shipments of 11.6 million units and a 14.9 percent share of the market. Garmin and Samsung came in third and fourth, respectively, each with roughly 3 million devices shipped last year.

For continued growth, vendors are better served by revving up their innovation engines rather than keeping up with the Fitbits, suggested Llamas.

“End-users expect improvement from what they have now, and new applications to spur replacement and increased adoption. Historical data, like steps taken and calories burned, has been a very good start,” he stated. “Prescriptive data, like what else a user can do to live a healthier life, coupled with popular applications like social media, news, and navigation, will push wearables further, and attract more users.”