SAN DIEGO. Oracle CIO Mark Sunday has a lot of users he needs to support and he’s using Linux to do it. The tech leader took the stage at the LinuxCon conference this morning to discuss how Oracle uses and develops Linux.

“Linux is our platform of choice across a wide variety of services,” Sunday said. “It is how we build products and how we provide services to our customers.”

Oracle is a massive organization of over 125,000 employees spread across 49 countries and according to Sunday, they all depend on Linux. Linux is the core technology that powers Oracle’s core collaboration, including email and its primary systems.

Sunday explained that Oracle’s use of Linux is also core to how it supports its end user customers.

“Linux is what we do to support over 6 million end users,” Sunday said.

Oracle has been building its own Linux distribution since 2006. Sunday revealed that while Oracle has lots of customers for Oracle Linux, perhaps the biggest customer of them all is Oracle itself.

Oracle Linux is based on Red Hat Enterprise Linux, though Coekaerts stressed that his Linux distribution isn’t about competing with anyone.

“We live in a world that is mission critical, so we figured that if we can provide support for the stack it’ll be much easier for our customers,” Coekaerts said. “So that’s why we got into the support business and we learned a lot doing that.”

Coekaerts’ team is also able to leverage the large testing farms that Sunday’s organization has, which also helps to improve the overall quality of Linux.

Another key differentiating point for Coekaerts is the fact that Oracle also has its own kernel, the Oracle Unbreakable Kernel, that sticks closer to the mainline of Linux kernel releases.

“Why we provide our own kernel is to make sure we can get new technology into the hands of our customers much sooner,” Coekaerts said.

Coekaerts argues that since the Oracle kernel is only some six to nine months behind the mainline of Linux, the features can be more current than a distribution using an older kernel.

“We don’t want code that only one distro runs,” Coekaerts said. “So if we’re closer to what Linus maintains than we can have a more rapid development and can be more competitive to other operating systems.”

As the supplier of Linux to Oracle, Coekaerts asked Sunday what more he wants from Linux. Sunday said that he wants the usual: faster, better, cheaper and even more reliable computing.

“We’re using Linux for a wide variety of uses at tremendous scale, so make it so we can use it as best as we can,” Sunday said. “Once again it’s the fundamental core that runs our business and we need it to be there for us.” 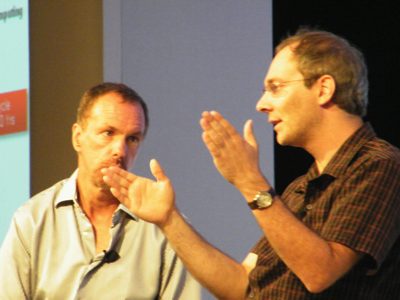 On the right: Wim Coekaerts, senior VP of Linux and Virtualization Engineering at Oracle

How the Public Cloud is Used by Coinbase, Samsonsite, Schrodinger, Edia, and Mercedes-EQ Formula E Team