The public cloud now accounts for just over a third (33.5 percent) of worldwide IT infrastructure sales, a 34.1-percent year-over-year increase. Revenue totaled $8.7 billion.

For comparison’s sake, the public cloud claimed a 27-percent share of the overall market. Servers, data storage systems and Ethernet switches all fall under the IT infrastructure category at IDC. 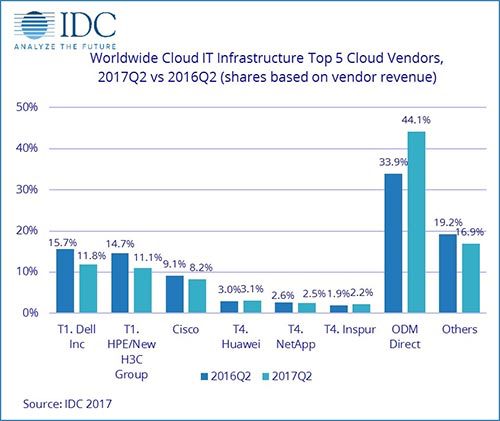 Demand from traditional or non-cloud customers keeps slipping, shedding 3.8 percent in Q2 on an annual basis. Nonetheless, the segment remains an important one, generating $13.6 billion in Q2 and representing more than half (52.4 percent) of the market.

Storage is in high demand, accounting for over a third of public cloud revenues in Q2, a 30.4-percent year-over-year increase. Sales of both Ethernet switches and servers rose 26.8 percent and 24.6 percent, respectively.

In prepared remarks, Stolarski said “it is important to remember that many of the other hyperscalers – Google, Facebook, Microsoft, Apple, Alibaba, Tencent, and Baidu – are preparing for their own expansions and Skylake/Purley refreshes of their infrastructure.” Skylake and Purley are newer processor architectures for high-performance servers from chipmaking giant Intel that cloud providers can use to speed up their workloads.

“At the same time, IDC is still seeing steady growth in the lower tiers of public cloud, and continued growth in private cloud on a worldwide scale,” continued Stolarski. “In combination, these infrastructure growth segments should more than offset the declines in traditional deployments for the remainder of 2017 and well into next year.”

Dell holds a slim lead, with 11.8 percent of the market on cloud IT infrastructure sales of over $1.4 billion. HPE is close behind with an 11.1-percent share of the market and over $1.3 billion in revenue.

One of the missteps IBM made last century was collapsing their sales model, which was services based, to generate a short-term revenue spike. Up...
Read more
Cloud

These are some of the best PSA tools for organizations of all sizes. What Is Professional Services Automation Software? Professional services automation (PSA) software aims to...
Read more
Big Data

What is Data Aggregation?

Data aggregation is the process where raw data is gathered and presented in a summarized format for statistical analysis. The data may be gathered...
Read more
Cloud

One of the missteps IBM made last century was collapsing their sales model, which was services based, to generate a short-term revenue spike. Up...
Read more
Big Data

NEW YORK — Companies that “doubled down” on their investment in mostly data-heavy technology during the COVID-19 pandemic have seen their revenue grow five...
Read more