Hybrid cloud computing is clearly on its way – and by some accounts is already there – to being the dominant cloud computing model. It shares the cloud spotlight, so to speak, with public cloud computing, with leading vendors such Amazon, Microsoft, Google, IBM, and a host of other firms. The private cloud is essentially a firm’s on-premises data center systems, configured more in the manner of the public cloud than traditional data center setup. Private cloud leverages virtualization and automation to pool and optimize resources.

How the Hybrid Cloud Works

“The fact is most companies moving from on-prem to the cloud simply can’t move the entire back office to the cloud. Functionality doesn’t exist or is too complicated or all of the above,” said Joshua Greenbaum, principal analyst with Enterprise Applications Consulting.

In some cases, it’s due to very vertical functionality not being available. A manufacturing firm, for example, can move basic functions to the cloud like Enterprise Resource Planning (ERP) or Customer Resource Management (CRM), but if you’re a supplier to aerospace and defense or serve a specific geographic firm with their own requirements with customizations and regulation to deal with, some of the needed functionality isn’t available out of the box from a cloud vendor and possibly never will be.

For one reason or another, on-premises and cloud data have to be kept separate. For example, a medical company might need to keep patient records on-premises in a secured database, but it can use Oracle or Peoplesoft for HR and accounting. Keeping the data separate is actually easy. It’s not like medical records will suddenly fall into the HR app, assuming you configure everything properly.

The hybrid cloud world by definition requires that there are varying levels of integration between on-premises apps and their data and the cloud. The two are functionally separate systems and should be walled off. That is carefully conceived of and engineered and can be done wrong. Then you end up with unanticipated problems that suddenly expose you to some kind of governance or regulatory risk.

More likely, though, it’s human error that causes data to move from one system to another. “Data does migrate between the two freely and needs to be well regulated. You might have tightly controlled data in your system and an employee has a Dropbox account that you don’t know about. If it’s not managed that’s a security violation. So that leakage exists,” said Greenbaum. 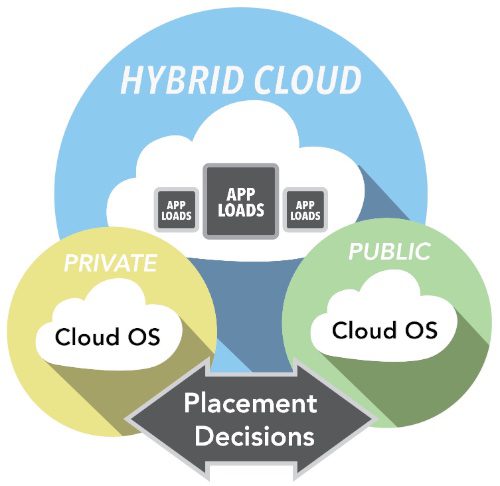 The main benefit of hybrid is the best of both worlds. You get to keep your legacy systems for archival or historical data, or whatever reason you need to hang on to it, and you get the benefits of the cloud. It’s scalability and elastic on demand, the primary appeal of the cloud.

If you find yourself in need of computing capacity, you have two choices: requisition, purchase, and deploy a server, which could take months, and then it sits idle and unused when the task is done but you still pay for it. Or you rent some capacity on AWS for the time needed and shut it down when done and cease paying for it.

It also allows you to maintain your legacy systems, which you will inevitably have to do. “The biggest issue is that for especially large enterprises and even medium sized, there are certain workloads and certain data that is never going to go outside of their internal private data centers. Whether it has to do with competitive senses or security issues, there are some things they will never let go of,” said Charles King, principal analyst with Pund-IT, an IT consultancy.

One reason everyone is moving to the cloud at a fantastic rate is security and privacy and you should, too, said Greenbaum. “It’s now abundantly clear on-premises data centers are vulnerable and IT staffs are under the gun to security concerns. Your stuff is much more secure to have a Microsoft or Amazon doing it for you, but they still interface with [your] older systems and if they are not properly locked down, that becomes a vulnerability vector,” he said. 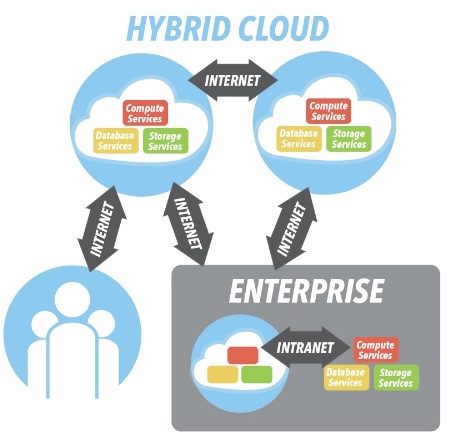 Moving to the cloud, even partially, has its challenges, said King. “The biggest problem that companies or cloud providers and businesses face using hybrid cloud is coordinating apps so that an app can work seamlessly in both environments, whatever that is. On the plus side we’re far enough along on those that the companies focusing on hybrid cloud have developed the tools and management processes that are necessary for customers to successfully manage those problems,” said King.

Another challenge is that switching to a cloud app is a big disruption. When you move to a cloud app, especially from an older, on-premises application, you are migrating data from an older system into a thoroughly modern new system, which can be fraught with complexity. Moving databases means a new schema, managing data, where everything can be different, which will undoubtedly break existing apps.

Another key concern is you are also upgrading and changing the user experience. The way you do things is different, and people tend to resist change, especially if there is no clear gain, and people don’t respond well to radical change. So you are introducing change and complexity in the already complex world of cloud, you have to ask if it’s worth it.

In choosing a provider, hybrid cloud providers assume you are maintaining your own data center and some IT functions. So the question becomes what are you looking to get out of hybrid cloud. Some might want it for times when they need a lot of compute power, such as during a compile. Others might use it as a disaster recovery solution.

“It pays to pay attention to what services are offered, what benefits you gain. It’s not as often in clear in hybrid as some traditional methodologies,” said King. “You are certainly going to be maintaining assets around data centers. So companies have to spend a lot of time on logistics and planning and make sure the benefits they think they are going to get are actually achievable.”

The market for hybrid cloud providers is growing as more and more enterprise realize that some form of hybrid cloud likely their best strategy. Clearly, the hybrid cloud market is a diverse as the companies that serve it. AWS, for instance, so heavily promotes the concept of the public cloud as the answer to any enterprise problem that it’s not known as a hybrid provider. Though strictly speaking, a company could cobble together a hybrid cloud using its offerings. Microsoft is particularly strong in hybrid cloud, and many cloud experts predict that this strength will be a big competitive edge for its Azure offering in the years ahead. 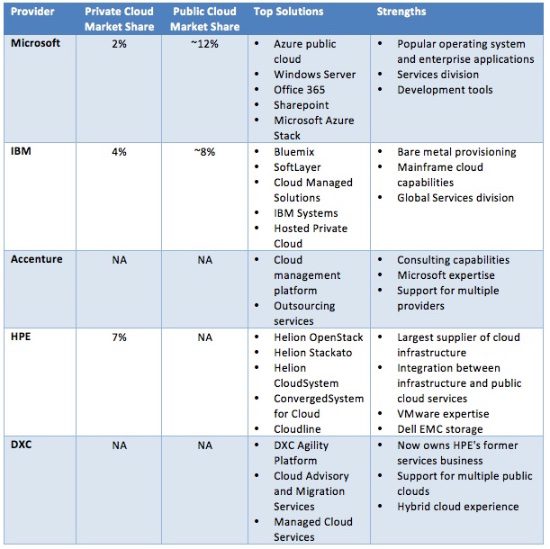 One of the knocks on cloud service providers like Salesforce, NetApp, Oracle, and ServiceNow is that they don’t offer significant custom fits. They are for the most part strictly off the shelf, one size fits all. They allow for some customizations or extensions to fit your business but by and large, they are fairly vanilla.

There is a watchword for the cloud called fit to standard, which means the cloud does by definition require you to accept certain business practices as standard. The cloud apps are fundamentally multitenant, so there is a requirement you do not do customization in the software.

“It’s not meant to be a common denominator approach, these are best practices, but in the cloud you have to do business as everyone else does business and if you want to deviate you do it in a hybrid environment and either build custom apps or build in the cloud but not a multitenant apps,” said Greenbaum. Also, many of the leaders of on-premises software have jumped into the cloud, offering SaaS versions of their once on-premises apps, but they haven’t always had parity. For example, Microsoft’s SQL Server initially was available to Azure subscribers as a partial implementation, but up until recently, it lacked some features of the on-premises version. It was only with the recent release of SQL Server 2016 that the on-premises version and Azure version are identical.

Right now, commercial enterprise software design has shifted to cloud-first and then the on-premises version, but Gartner predicts that by 2019 or 2020, it will be cloud-only for software development, supporting either public or private cloud, or both.

So the public cloud is growing and, one way or another, companies IT infrastructure will leverage it. Moving your entire data center to the cloud may be unsuitable, especially if there are legacy systems that will not be available in the cloud. More likely, the public cloud will be a piece of your overall computing systems, and in that scenarios, you are a hybrid cloud user.