Deploying Cloud Infrastructure at the Speed of the Cloud

Two of the chief values for the cloud are speed and agility. Cloud orchestration and automation tools promise to allow IT organizations to move significantly faster and become more competitive as service organizations. While orchestration tools typically do a great job of deploying applications flexibly once virtualization is in place, the underlying (or horrors—the non-virtualized and legacy) infrastructure is not very agile or automated. People are not addressing this head on. Instead, a lot of hand waving has been done at physical infrastructure issues, and it’s the Achilles’ heel of IT when trying to get agile. However, it doesn’t have to be this way.

Enterprise IT is under pressure from many sides—mandates, budget, user expectations and competitive gaps.

First of all, it’s a truism that enterprise IT’s mandate is shifting aggressively toward supporting innovation agility. However, budgets are not increasing to help IT meet this mandate. According to survey results from Gartner’s 2014 CIO Agenda Report, global CIOs report a cumulative IT budget increase of only 0.2 percent in in 2014.

The reason may be another point of pressure—users’ consumerized expectations of IT are making them go elsewhere. The same Gartner report has CIOs’ reporting that 25% percent of IT spending is happening outside of the IT budget—and that’s only what they can see. In other words, enterprise IT organizations are losing “market share” to public cloud offerings.

This shift may be explained by the competitive gap between the near instantaneous availability of public cloud resources and the relatively slow delivery available from traditional IT processes. According to Enterprise Management Associates’ (EMA) 2014 Software Defined Data Center study, 47 percent of enterprises self-report taking anywhere from a week to over a month to deploy infrastructure for application developers and testers. 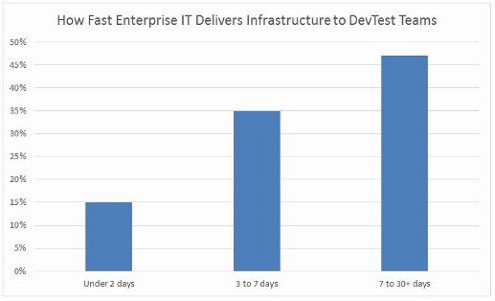 Compared to the “minutes” it takes to get access to public cloud resources, this is a significant competitive gap. Of course, not everything will shift to public clouds anytime soon. There will be plenty of infrastructure business for IT to handle well into the future, but it’s in the best interest of IT groups to raise their game.

Physical Infrastructure is Still a Major Obstacle to Cloud Agility

Two of the chief tenets of the cloud and accompanying cloud automation are that all infrastructure becomes virtualized and has an automation-friendly, preferably REST-style API. This is certainly a helpful and simplifying vision. It makes it possible to turn “infrastructure into code” because everything is abstracted, software-defined and programmable.

The chief aspirational examples for this vision are webscale companies like Netflix that operate their businesses based on public cloud infrastructure from the likes of Amazon Web Services (AWS). Unfortunately, for most enterprise organizations that don’t have the luxuries of youth and seemingly unlimited IT budgets that webscale businesses do, IT infrastructure reality can be quite a bit messier. According to a 2013 NTT Communications study, 58 percent of CIOs expressed that one of the biggest obstacles to cloud adoption was the complexity of their existing systems. Any IT organization that has been in existence for more than 10 years has legacy infrastructure that isn’t virtualized and is probably not going to disappear anytime soon.

The physical realities of infrastructure have an impact on cloud-like agility for IT in a couple of different ways:

Where Do Orchestration and Automation Fit In?

There are wonderful orchestration and automation tools available today; however, the vast majority fall into two major categories, neither of which sufficiently addresses the physical realities of infrastructure agility:

Of course, this is not to say that both of these don’t have validity and aren’t useful—clearly they are for certain use cases and environments, but they have clear limits.

Typically, the solution offered to overcome these challenges is an API that you can use to extend the tool’s business logic to address whatever it doesn’t do out of the box, including physical infrastructure. There are some real problems with this, but suffice it to say that most enterprise IT teams aren’t able, even if they wanted, to build and sustain a home-grown automation architecture (which usually just amounts to a massive pile of hard-to-maintain scripts) to handle these requirements and integrate with those APIs.

The good news is that orchestration technology and matching best practices exist today to solve the challenge of heterogeneous infrastructure. The approach includes these following key principles: