Synergy Research Group’s latest analysis of the market for the second quarter (Q2) of 2017, which includes infrastructure-as-a-service (IaaS), platform-as-a-service (PaaS) and hosted private cloud, revealed that Amazon remains comfortably atop the heap with a 34-percent share. Microsoft took second place with 11 percent, followed by IBM (eight percent) and Google (five percent). Alibaba and Oracle are among the fastest-growing cloud providers trailing these industry giants.

Collectively, the world’s cloud infrastructure vendors are generated an estimated $11 billion in revenue during Q2.

“Microsoft, Google and Alibaba are all growing at truly impressive rates, but in a huge market that continues to grow at over 40 percent per year, market leader AWS continues to grow its market share,” said John Dinsdale, a Chief Analyst and Research Director at Synergy Research Group, in an email to Datamation. 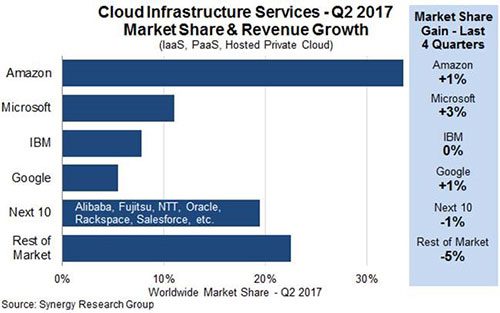 “It remains over three times the size of its nearest rival and its revenue growth over four quarters is around $1.2 billion. The hyperscale cloud providers continue to dominate the market and it’s tough to see that changing any time soon,” Dinsdale continued.

Among the many milestones his company’s cloud reached during the quarter, Jeff Bezos founder and CEO of Amazon, noted in a statement that Amazon had “launched more than 400 significant AWS features and services [and] migrated more than 7,000 databases using AWS Database Migration Service.”

Amazon is also busy expanding its global cloud footprint in the fast-growing Asia-Pacific market. On June 20, the company announced it plans to open another cloud data center in Hong Kong next year.

“This will be the eighth AWS Region in Asia Pacific joining six other Regions there — Singapore, Tokyo, Sydney, Beijing, Seoul, and Mumbai, and an additional Region in China (Ningxia) expected to launch in the coming months,” blogged Jeff Barr, chief evangelist at Amazon Web Services. “Together, these Regions will provide our customers with a total of 19 Availability Zones (AZs) and allow them to architect highly fault tolerant applications.”

SEE ALL
CLOUD ARTICLES
Previous articleWhat is Big Data Analytics & What are the Benefits?
Next articleMachine Learning vs. Deep Learning