Businesses are increasingly migrating their IT workloads to the cloud, benefiting hyperscale cloud operators the most, finds a new study from Synergy Research Group.

Currently, there are 24 cloud operators that fit the bill, according to the technology analyst firm. In general, a hyperscale cloud providers have a broad data center footprint, each with 45 or more data centers across the globe. They operate at least two data centers in each major region, namely North America, Latin America, Europe, Middle East and Africa (EMEA) and Asia-Pacific (APAC). 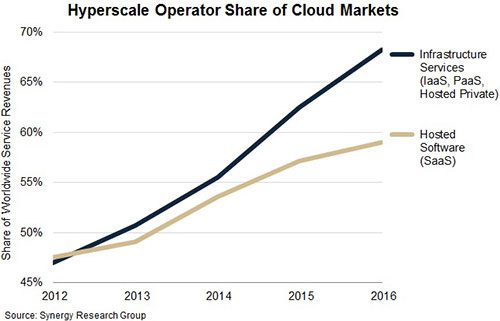 Typically, they have hundreds of thousands of servers at their disposal, or in the case of cloud giants Amazon and Google, millions of servers. Combined, these 24 hyperscale cloud companies, a group that also includes Microsoft and IBM, operate nearly 320 data centers worldwide. Amazon Web Services (AWS), for example, operates 42 “Availability Zones,” each with one to three data centers.

That reach, combined with the sheer amount of computing resources available to them, have made them the go-to cloud vendors.

Flip the calendar back to 2012, and hyperscale clouds generated 47 percent of each respective market’s revenues.

“Synergy’s new research shows that hyperscale operators are increasingly dominating IT markets in a variety of ways,” said John Dinsdale, a Synergy Research Group chief analyst and research director, in a research note sent to Datamation. “They are hoovering up cloud services market share; they are increasing mindshare of enterprise CTOs; and they are increasing their share and influence of spend on data center infrastructure hardware.”

And for today’s biggest cloud company, it appears that there’s nowhere to go but up. “Synergy’s latest forecast shows that the hyperscale operators’ market control and influence will only increase over the next five years,” Dinsdale added.

Hyperscale clouds are also cementing their hold on the market. Recently, Synergy observed that the rise in Microsoft, Google and IBM cloud sales during the fourth quarter of 2016 (on year-over-year basis) came at the expense of smaller players. Amazon, the leading public IaaS and PaaS provider, was barely affected.