Are Docker and VMware Strange Bedfellows?

“I think there’s an emerging category of application for which containers represents potentially a very efficient way of using infrastructure,” he said in mid July. “I think we’re sort of watching the space closely, we’re starting to work closely with some of the early movers. We’re looking at compatibility with Docker [the open source container project] on our platform. [We’re] really being client driven – so we don’t see it as something that many of clients are that interested in yet, but it’s something we’re keeping an eye on.”

Fast forward to August 25, and that sense of “watching the space closely” blossomed into a full-blown alliance. VMware announced at VMworld a joint initiative with Docker, Google and Pivotal to “help enterprises run and manage container-based applications on a common platform at scale in private, public and hybrid clouds.”

Not mentioned in the press release is the tech world’s rapid shift from the stand-alone datacenter (the giant VMware’s forte) to a cloud-based distributed model (containers’ forte). And that there are app developers who eagerly embrace containers and – depending on the situation – give nary a thought to a top-dollar virtualization platform. In the current era, the Web-based app is king, and containers cater to the Web-based app.

In other words, containers are coming on strong, and VMware had to address the issue. VMware’s embrace of containers is widely seen as a defensive move. The company will incorporate the competitive threat as fast as that threat can establish itself. But the story is more complicated than that.

No one knows exactly how this marriage of potential competitors will play out. It’s possible that the Docker-VMware union will offer the best of both worlds. It’s also possible that containers will grow to eclipse traditional virtualization, and this new alliance was a huge early step in that process.

Clearly, the competitive threat is still hypothetical. VMware has a sprawling, entrenched ecosystem, and its platform includes sophisticated management tools that make it an enterprise favorite. And containers are still new in the hype cycle. At the press conference Monday morning at VMworld, CEO Pat Gelsinger informally polled the press crew: How many of you were talking about containers six months ago? Only a few hands were raised.

The two technologies certainly aren’t head-to-head competitors. They’re quite different from one another, yet might be good friends. As Gelsinger positioned it in his keynote speech, “The best way to deliver containers is through a virtual machine.”

But it’s not likely that every developer agrees with that.

In the highly competitive world of technology, some experts view VMware’s partnership with Docker in a less than favorable light. One of those is Gordon Haff, Cloud Computing Evangelist at Red Hat.

“VMware isn’t embracing important new technologies and approaches such as OpenStack and Docker/containers so much as it’s paying lip service to them,” Haff said. “Where’s VMware’s deep technical involvement and community participation in the vein of what Red Hat is doing? (Aside from VMware’s OpenStack Neutron involvement via its Nicira acquisition.) At VMworld, we saw Band-Aids and glitter being applied to existing VMware products – not a commitment to chart a new course.”

Dana Gardner, analyst at Interarbor Solutions, sees benefit to the alliance. “I see this as complementary to VMware’s larger goals of SDDC, hybrid cloud, devops and DaaS,” he said. “The question is over time whether you would choose to go to containers on bare metal without VMs for certain workloads.”

However, he continued, “I don’t see how that obviates all the other needs for orchestration, automation, management and operations efficiency. Basically, if containers take off then you have another sprawl problem to solve, and VMware can easily step up to the plate on that rapidly. So I see containers as a win-win for ends users and VMware.” Furthermore, “The licensed commercial operating system platform and middleware providers may not be as sanguine about containers’ proliferation, as it makes Linux on commodity hardware a tough act to beat.”

Sam Charrington, analyst at CloudPulse Strategies, noted that “The momentum behind Docker has gathered rather quickly, driving increased interest in Linux containers as a more efficient application deployment environment. By embracing Docker and containers, VMware is at once protecting its interests by ‘keeping its (potential) enemies closer,’ and enabling a likely powerful future competitor with a disintermediating technology to more easily gain access to the enterprise. It will certainly be interesting to see how this all plays out.”

Charrington’s quote reflects the nature of the conundrum – how VMware has much to gain and much to lose. As he noted, VMware is “enabling a likely powerful future competitor.” That always creates serious risks, however necessary it was for VMware to make this move.

Yet no matter how you see VMware’s embrace of containers – as an awkward defensive move or a step forward to grow its platform – one thing appears certain. VMware is determined to morph and change to keep up with the shift to a cloud-based world. As VMware VP Bill Fathers said to me back in mid July:

“I think we can see ourselves shifting as a business from one that’s perceived as selling on-premises software to a company that’s providing a hybrid solution. So we think, going forward, clients are going to live in this world where, today, [although] less than two percent of the workload is sitting in the public cloud, it’s likely that in the next 10 or 15 years, clients are going to have this mix of on-premise and off-premise environment. And we’re very focused on how you can make that work for them, so they get to take advantages of the investments they’ve already made.” 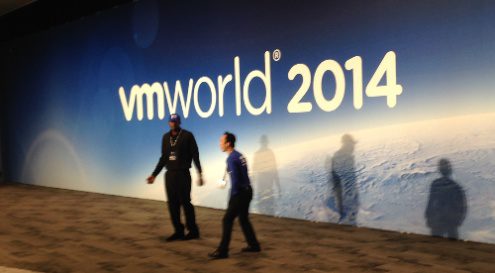