The Internet of Things (IoT) has attained peak hype, according to Gartner’s Hype Cycle for Emerging Technologies report for 2015.

The IoT joins other technologies like self-service advanced analytics, autonomous vehicles and wearables that are nestled on the “Peak of Inflated Expectations,” indicating that a precipitous drop to the “Trough of Disillusionment” awaits. Gartner predicts that the IoT will reach this phase sometime within the next five to ten years, after which it will become mainstream and enter the “Plateau of Productivity.” Current inhabitants of trough include cryptocurrency exchanges, hybrid clouds and augmented reality, with virtual reality on the cusp of making its escape.

IoT technologies will prove their worth in the digital business stage of an organization’s technology journey, which the research firm describes as “the first post-nexus stage on the roadmap and focuses on the convergence of people, business and things.”

Nexus refers to a confluence of mobile, social, cloud and data that Gartner calls the “Nexus of Forces.” It primarily comes into play in the digital marketing phase, wherein businesses seek solutions that capitalize on these trends.

The next step is the digital business stage, and that’s when IoT can help enterprises kick their efforts into high gear.

“The IoT and the concept of blurring the physical and virtual worlds are strong concepts in this stage,” said the analyst group. “Physical assets become digitalized and become equal actors in the business value chain alongside already-digital entities, such as systems and apps.”

To build value from IoT and other cutting-edge technologies, Gartner is urging IT managers to stretch boundaries.

“This year, we encourage CIOs and other IT leaders to dedicate time and energy focused on innovation, rather than just incremental business advancement, while also gaining inspiration by scanning beyond the bounds of their industry,” said Gartner vice president and distinguished analyst Betsy Burton in a statement.

Regardless of which stage enterprises find themselves in, a little experimentation can open up new avenues to success. “Many early adopters have embraced quite advanced technologies, for example, autonomous vehicles or smart advisors, while they continue to improve nexus-related areas, such as mobile apps,” stated Burton. 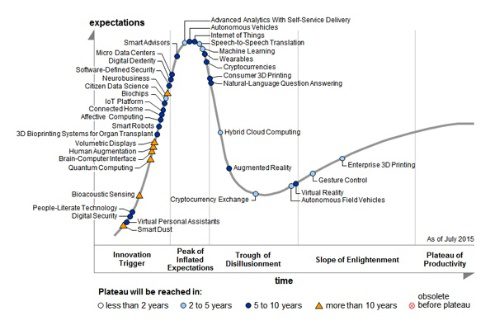 SEE ALL
DATA CENTER ARTICLES
Previous articleTop Tweaks for the Linux Desktop
Next articleLinuxcon: IBM Admits zOS is Still Better than Linux (for some things) [VIDEO]